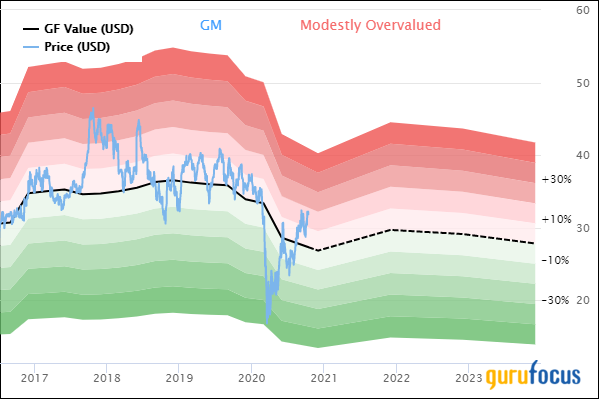 According to GuruFocus’ Aggregated Portfolio feature, there are four automakers that gurus actively own and purchased during the second quarter. These companies include General Motors Co. (NYSE:GM), Tesla Inc. (NASDAQ:TSLA), Ford Motor Co. (NYSE:F) and Nio Inc. (NYSE:NIO) and all four have made headlines throughout the third quarter as vehicle markets have recovered.

The Aggregated Portfolio feature allows users to sort through companies that are owned, bought and sold by gurus. It can be searched by sector, region and market cap of individual stocks while sorting results based upon individual gurus and investment firms.

The company recently made headlines with its capitalization on the recovering vehicle sales in China during the third quarter. The company delivered 771,400 vehicles during the quarter in China alone according to reports from Reuters. This is the first time that the company has been able to grow sales in China in two years.

The company has found massive success, despite being a latecomer to the electric vehicle market, with its Wuling Hong Guang MINI EV. The micro two-door EV has a starting price of 28,800 yuan ($4,268) and was reported to be China’s best-selling EV in August.

Unfortunately for the company, sales took a dive in the U.S. market, dropping 10% year over year. The company announced that it delivered 665,192 vehicles, with larger SUVs and trucks driving sales. The small recovery in sales was thanks in part to a September rebound that saw sales increase year over year. Compared to second-quarter delivery numbers of 492,489 vehicles, sales rose significantly.

As of Oct. 13, the stock was trading at $31.77 per share, significantly higher than March’s year-to-date low of $18.69, with a market cap of $45.38 billion. The GF Value line shows that the stock is currently modestly overvalued.

Founded in 2003 and based in Palo Alto, California, Tesla is a vertically integrated, sustainable energy company that also aims to transition the world to electric mobility by making electric vehicles. It sells solar panels and solar roofs for energy generation, plus batteries for stationary storage for residential and commercial properties, including utilities. It also makes solar roofs and plans to enter the HVAC market.

The third-quarter saw the company break all expectations and deliver a record 139,300 vehicles. The deliveries were dominated by the Model Y and ever popular Model 3 thanks in part to production at the new Shanghai plant and well surpassed second-quarter deliveries of 95,200 vehicles. CEO Elon Musk claims the company is well on its way to breaking 500,000 vehicle deliveries for the entire year.

Other headlines were made thanks in part to its Battery Day event. During the event, Musk made big announcements, including new battery goals to extend range and decrease prices leading to his end goal of building and selling a $25,000 electric car.

These new battery changes have seen the company target nickel mines as potential partners to prevent the company from running into bottlenecks in production from supply shortages. Should the company be able to secure a partnership, it will be able to increasingly manufacture its batteries in-house and avoid reliance on other companies.

Oct. 13 saw the stock at $444.50 per share with a market cap of $415.07 billion. The GF Value line shows the stock is trading at a significantly overvalued level.

GuruFocus gives the company a financial strength rating of 5 out of 10 and a profitability rank of 3 out of 10. The company has been constantly plagued by new long-term debt as indicated by the severe warning sign despite a cash-to-debt ratio of 0.56 that betters 54.03% of the industry. Thanks in part to rising production and vehicle deliveries, the company was able to generate positive cash flow in 2019.

Ford settled into a third place ranking with eight gurus actively owning the company at the end of the second quarter. Guru owners included Pzena, Fisher and Dalio.

Ford manufactures automobiles under its Ford and Lincoln brands. The company has about 14.1% market share in the United States and about 7% share in Europe. Sales in North America and Europe made up 68% and 20% of 2019 auto revenue, respectively.

For the third quarter, deliveries settled at 551,796 vehicles total, up from 433,869 vehicle deliveries in the second quarter. The sales were largely dominated, as per usual for the company, by truck and SUV sales. Compared to second-quarter year-over-year numbers, sales made a massive recovery, only missing the 2019 mark by 4.9%.

The company has also recently made headlines and seen share prices surge thanks in part to optimism about the company’s new leadership and upcoming vehicles. According to Bloomberg reports, the new management team is expected to be an upgrade by the investment community. New CEO Jim Farley has plans to accelerate the company’s turnaround and is supported by the new Bronco and Mach-E models that have garnered widespread media coverage and significant numbers of early deposits.

On Oct. 13, the stock was trading at $7.70 with a market cap of $30.51 billion. The GF Value line shows the company is currently trading at fair value.

GuruFocus gives the company a financial strength rating of 3 out of 10, a profitability rank of 6 out of 10 and a valuation rank of 7 out of 10. There are four severe warning signs issued for the company, including new long-term debt and poor financial strength. The company’s operating margin has declined to -3.86%.

Nio managed to increase deliveries across the third quarter to 12,206 vehicles, a year-over-year increase of 154.3%. The company was excited to surpass its second-quarter delivery number of 10,331 vehicles as it began delivery of the new EC6 model. Yearly deliveries for the company have seen rapid expansion moving well into the triple-digit increases.

On Oct. 13, the stock was trading at $21.39 per share with a market cap of $26.13 billion. The stock has seen rapid growth this year as the company continues to increase deliveries and expand its reach in China.

GuruFocus gives the company a financial strength rating of 2 out of 10 and a profitability rank of 1 out of 10. The company shows several severe warning signs, including poor quality of earnings and an Altman Z-Score of 0.36, placing the company in the distress column. Despite increasing long-term debt, the company’s cash-to-debt ratio of 0.81 places it higher than 62.99% of the industry.

Not a Premium Member of GuruFocus? Sign up for a free 7-day trial here.

This article first appeared on GuruFocus.