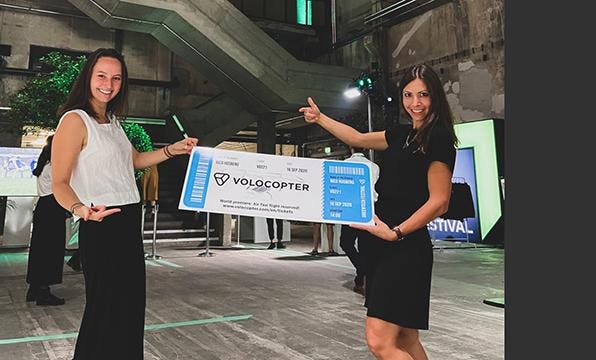 You may have heard that German air taxi developer Volocopter has announced that it’s offering advance reservations for rides in its electric, single-passenger VoloCity air taxi, which has not yet received safety certification. The rides will be about 15 minutes long, cost $23.66-per minute, and won’t go anywhere.

Some might say that’s a metaphor for Urban Air Mobility (UAM) in general.

Volocopter is not offering specifics on when or where the rides in its 18-rotor eVTOL aircraft will take place. The company will say only that they’ll happen within 12 months after Volocopter’s commercial launch, expected some time in 2023.

The cost for what presumably will be a joyride out and back to a single point is $355. You can reserve your spot for a 10 percent deposit, but step lively because only 1,000 reservations are being taken. For Americans, the total cost will probably include a quaint old airline ticket since the VoloCity’s few previous test flights have taken place at its headquarters in Bruchsal, Germany, and in Dubai, Singapore, and Helsinki, locations where approval may readily be granted.

The Pause That Refreshes?

“Boeing
has paused its investments in UAM and Airbus quietly shuttered their Voom initiative. Aerospace companies are getting out of urban air mobility almost at the same time that the terrestrial transport folks seem to be getting into it. It’s weird.”

Last week, Boeing announced the cessation of operations at its two-year-old “NeXt” innovation unit, which focused on manned and unmanned UAM, citing slumping revenues stemming from the global pandemic. Boeing subsidiary Aurora Flight Sciences collaborated with NeXt to develop an autonomous passenger air vehicle that made a test flight in January 2019. Aurora’s future is in question, as is that of Wisk, a joint venture with Google billionaire Larry Page’s Kitty Hawk to develop a two-person air taxi.

Other Airbus ventures related to urban air mobility have gone quiet as well. The company classified its first eVTOL aircraft project, the unmanned Vahana, as a technology demonstrator. It successfully completed a 138-flight test program and closed down in December 2019. The CityAirbus, a larger fixed-rotor eVTOL aircraft with four-passenger capacity, made its first untethered flight in the same month. It too, is strictly a demonstrator about which little news has been heard this year.

As major airframers appear to pull back from UAM, automakers appear poised to step in, though their plans are decidedly vague. Early this year Uber’s
UAM division, Uber Elevate, issued a joint announcement with Hyundai Motor Company touting an agreement to develop and mass produce hundreds of thousands of Uber air taxis. When pressed for specifics of its plan to manufacture air taxis in volume, Hyundai’s response was that the company “will make a breakthrough in volume production of aircraft with innovative methods.”

More recently General Motors
announced that it’s exploring options to get into the UAM market from investing to building its own air taxis. The announcement is likely as much advertisement for GM’s new Ultium advanced electric battery and electric drive units as a headfirst dive into UAM.

A GM spokesman declined an interview but told me via email, “We believe our Ultium battery system has potential to make an impact on the world in a lot of ways and aerial mobility is one we’re very interested in. Whether that’s partnering, investing or manufacturing, we can’t say at this point.”

Like other automakers, GM is looking to expand beyond its core consumer vehicle business as the auto industry consolidates. Ironically, its claimed battery advances potentially give the ground based vehicles it has historically specialized in an even greater cost advantage over air taxis than current cars and buses.

The motivation for Volocopter’s advance ride sales announcement comes from a desire to introduce the public to air taxis the company says.

“With the start of reservations, we now invite our supporters and innovators around the world to join us and be amongst the first to experience this new and exciting form of mobility,” said Volocopter CEO Florian Reuter.

But Aboulafia asks why Volocopter feels that’s necessary and why believers in the promise of UAM would put down a deposit. “If the sky is going to be flooded with these things, why do you need to buy a ticket in advance? There’ll be plenty of space available.”

Numerous studies, including Airbus’ own internal research, assess UAM as a limited transportation option for well-heeled consumers, reaching some form of maturity in the 2040s. Given all of the as yet undeveloped building blocks from ground infrastructure and unmanned air traffic management to eVTOL advances, aircraft certification and public acceptance, UAM startups are scrambling to stay in business until an actual market finally emerges.

Many are pivoting to offer drone delivery services, pitching their craft as small to midsize cargo haulers, including Volocopter, or looking for other ways to generate cash flow — Volocopter is developing a crop-sprayer version of its aircraft with John Deere.

Volocopter’s sale of tickets for a service that doesn’t exist suggests it’s looking for publicity, potentially for fundraising, says Aboulafia. “You’ve got to stay in public view to attract cash. It would be interesting to read the fine print on the tickets,” he says.

Recent FAA approvals for small drone delivery services by Amazon
, Walmart
and Google
/Wing could further complicate the UAM market. Their lead-to-market and potential numbers will literally occupy market and airspace that air taxi companies seek to leverage. Public acceptance, or rejection, of small commercial UAVs will have implications for UAM as well.

The pullback by large aerospace firms, Covid-19 notwithstanding, indicates growing recognition that a UAM market may not pan out as imagined. Entry by automotive players seems as much part of a search for new revenue streams as a deep commitment to electric air taxi services.

The mixed messages and a lack of market development are forcing firms like Volocopter to find alternate ways to survive.

“There’s no better way to generate interest [in UAM] than throwing in the fear-of-missing-out factor,” Aboulafia observes. “But Volocopter’s 300 Euro [$355] advance ticket price is reality.”

Volocopter’s plan to sell joyrides on its VoloCity eVTOL craft before it can offer passenger transport service in the hazy future reflects some unappealing noise in UAM market.