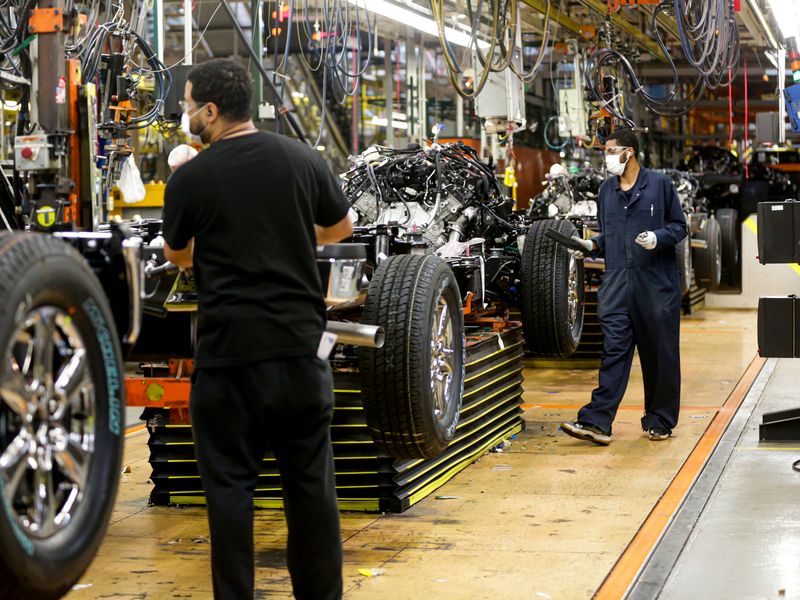 “Everything that has been coming back into the dealers from the plants in May has essentially gone out,” Schuster said.

“Frankly, I’m wondering where these sales are coming from. In many cases, there is just not a lot of inventory out there, especially on the truck side of the market. I know from a personal standpoint, just talking to friends and neighbors, that many of them are still sitting on leased vehicles that are running month-to-month and have been extended because they just can’t find a replacement vehicle.”

In the U.S., especially, consumers have made moves to protect their investments and keep their payments low. Schuster noted that leasing has increased along with the number of long-term loans—those at least 72 months in length.

These sales and leasing figures are coming even as incentives continue to drop. At this point, auto makers don’t need to employ them, Schuster said, noting that the average vehicle transaction price is at about $35,500.

“The market has not been able to get that inventory back to any normal type of level since that pullback in production back in April,” Schuster said. “It is something the industry is going to be fighting for.”

But there are a lot of factors that need to come together if the U.S. market is going to continue its strong growth trajectory, Schuster said. For starters, the economic stimulus package, which included $1,200 stimulus checks and $600 weekly boosts to unemployment, played a significant role in helping the auto industry rebound quickly. This means a second round of stimulus will be just as important, according to Schuster.

“Without a deal, I think the recovery path we are on takes a substantial downward direction,” Schuster said. “At what level and how far does it deviate from what we are expecting is difficult to say. A lot of that stability is hinging on a further stimulus to crutch us back to full recovery.”

The role of electric vehicles also has potential to impact the market overall, especially as auto makers look to inject EV models into growing and popular segments such as SUVs and trucks. At this point, though, it’s tough to say just how much the U.S. consumer will embrace those models.

“Put an EV in a segment where consumers want to buy a vehicle and I think you have a better shot at it,” Schuster said.

Price, charging infrastructure and battery life remain some of the biggest hindrances to the growth potential of electric vehicles.

Availability and consumer choice, though, won’t be a factor.

Globally, automotive markets are showing varying degrees of a V-shaped recovery, according to Schuster, with both production and sales at their lowest levels in April for many regions.

“This is the first time and hopefully the last time we have seen this happen,” Schuster said. “India had zero vehicles in April: Zero vehicles sold, zero vehicles produced.”

China’s sales and production levels fell to their lowest points in February, with SAAR at 3.31 million.

Globally, Schuster said, all of the markets are rebounding as consumer confidence continues to grow and the vehicle inventory replenishes, albeit more slowly than demand.

So far, production has ramped back up with many plants. Especially in North America, plants are operating with overtime and weekend shifts, and many auto makers have forgone the traditional summer shutdowns to make up ground lost early in the year. Even with these changes, though, global utilization rates were at their lowest levels ever in 2020, right around 51 percent.

Schuster expects utilization to reach about 65 percent by 2024, but still well below the peak utilization rate of 80 percent rate in 2007.

Nonetheless, the recovery of vehicle production is expected to follow the same kind of V-shaped recovery pattern that sales are showing.

Worldwide, Schuster projects that 2020 will see about 73.5 million vehicles produced, a drop of about 17 percent overall from 2019, which saw 88.8 million units worldwide. Coming into 2020, ahead of the coronavirus, vehicle production was expected to be around 90.4 million.

Schuster said production levels should continue to grow, reaching 84.3 million units next year before nearly fully rebounding to 90.1 million by 2022 and 92.8 million in 2023.

When considering the markets’ continued recovery on a compounded annual growth rate basis, some of the emerging markets—including Brazil, Eastern Europe and India, which have projected CAGR of 13.6, 12.3 and 10.7 percent, respectively, through 2023—show the greatest potential for growth. But Schuster notes that the growth comes with a fair amount of risk.

This means that a substantial amount of growth in the long term will be dependent on the top markets. The projected CAGR for Western Europe (8.5 percent), China (6.4 percent) and the U.S. (6.1 percent) are hovering closer to the worldwide average (7.8 percent) for CAGR recovery through 2023.