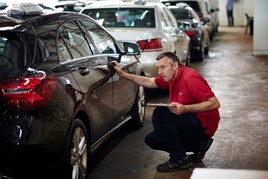 BCA is reporting that for the fourth consecutive month that average used car values remained above £8,000 in September, with sold volumes also rising during the month.

The remarketing company recorded average used car values of £8,363 in September, a rise of 6.9% over the month with online sold volumes rising by a substantial 31% during September to reach the highest point on record.

BCA is now selling exclusively online for six days a week having introduced a new Saturday sale programme in mid-September which subsequently went weekly from October 3.

Overall buyer demand for stock remains strong, it says, with an increasing focus on stock that is ready to take away and retail immediately.

“It is this strength in depth in the used car sector that has been integral to the industry trading so efficiently and effectively in the post-Covid19 marketplace.”

The new channel acts as a virtual showroom extension for BCA’s trade customers, providing access to a huge portfolio of retail-prepared vehicles that are ready to sell from the point of purchase, says BCA.

“From the vendor perspective, it is worth remembering that the remarketing basics remain just as relevant in an exclusively digital marketplace and after a sustained period of strong prices, some readjustment is likely to happen at some point,” continued Pearson.

“Ensuring that every vehicle has the appropriate documentation from V5 to service history, describing the vehicle with all of the add-value specification and also providing all the equipment at point of sale remain as important as ever.”

He concluded: “Exceptionally strong consumer demand has driven the wholesale market to the record levels seen over the last few months.

“However, if we see a shift towards more normal seasonal conditions, buyers will quickly become focused on condition and presentation. This means it will be even more important for sellers to make use of BCA’s insight and intelligence to keep abreast of any changes in market sentiment.”