BMW AG BAMXF has agreed to pay a fine of $18 million in order to settle the charges of reporting inaccurate and misleading monthly U.S. vehicle sales figures for five consecutive years.

The Securities and Exchange Commission (SEC) discovered that from 2015 through 2019, BMW boosted its monthly sales by maintaining a reserve or “bank” of unreported retail car sales. This pool of unrecorded sales was utilized by the automaker to meet its monthly sales targets, irrespective to when the sales actually materialized. The malpractice reportedly aided the company to publicly maintain a dominant retail sales position over other luxury auto companies.

Post this revelation, BMW and two of its U.S. subsidiaries — BMW North America and BMW US Capital — had to jointly pay $18 million as penalty, which the companies will raise through their investors in corporate bond offerings.

The German luxury automaker has been under the SEC probe since late 2019 due to its sales malpractices. Per SEC, the company was involved in a fraud technique known as sales punching that allegedly helped the automaker become a leading brand among its rivals.

A sale punching is a well-known way to artificially boost sales statistics. It is described as a process in which dealers are paid to register cars as a loaner or tester that are still standing on car lots. The company would count those as having been sold to customers when they had not been. It appears as inflated sales, which on a monthly balance sheet looks good but creates other problems down the line.

Post the order by SEC, BMW issued a statement clarifying that the findings of the latter did not put any allegations on the company for any global misconduct.

The SEC is also investigating automaker Nikola Corporation for deceiving investors about its business prospects. A parallel inquiry is also underway by the Department of Justice.

Notably, BMW is not the first manufacturer to be targeted over its sales practices by the U.S regulator. Last September, Fiat Chrysler FCAU agreed to pay a  $40-million penalty to the SEC for misleading investors by inflating monthly sales figure over a five-year period (between 2012 and 2016). The company inflated its new vehicle sales by paying dealers to report fake sales numbers.

Furthermore, Fiat Chrysler joined General Motors GM and Ford F in ending the practice of disclosing monthly U.S. sales numbers. The companies now report the U.S. sales numbers quarterly, while most of the other car manufacturers still report results on a monthly basis.

BMW reported a loss per share of 39 cents in second-quarter 2020 as against the earnings of $2.48 per share recorded in the year-ago period.

Moreover, the company registered revenues of $21,988 million during the June-end quarter, making a steep decline of 23.9% from the year-earlier sales of $28,889 million. This marked the company’s worst quarterly performance since 2008 amid the pandemic-induced sluggish demand. The underperformance also resulted from the company’s elevated expenditure on electric vehicles and other related technologies.

The Munich-based premium automaker is one of the leading manufacturers of electrified vehicles. The company plans to unveil five all-electric automobiles namely BMW i3, the MINI Cooper SE, the BMW iX3, the BMW iNEXT and the BMW i4 by the end of 2021. Moreover, it targets to roll out 25 electrified models by 2023.

Shares of the company have declined 15.2% year to date, underperforming the industry’s fall of 6.2%. 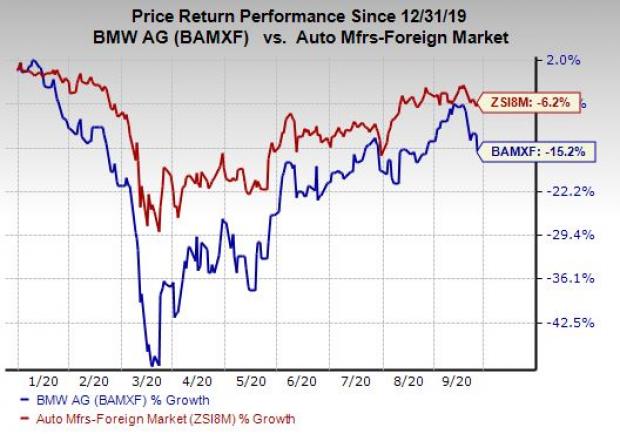