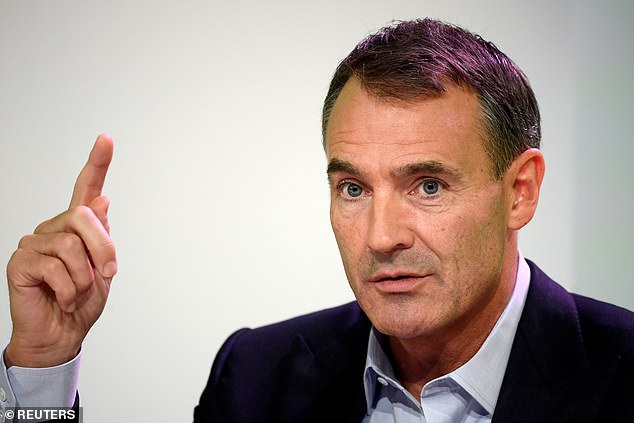 By Francesca Washtell For The Daily Mail

BP has backed plans to bring forward a ban on the sale of new petrol and diesel cars in the UK.

Bernard Looney, chief executive of the FTSE 100 energy major, said the ban ‘can and should be brought in sooner than 2040’ – the current target set by the Government.

Ministers and officials are looking into whether or not the date should be changed to 2035.

Rub of the green: BP chief exec Bernard Looney will take advantage of the shift from oil

Looney said: ‘Whether that is 2035, 2032 or 2030, we are up for it – and importantly up for the measures and supporting policies to boost electrification and hydrogen in transport that would make it possible.’

BP also warned yesterday that demand for oil may already have peaked as the Covid-19 pandemic speeds up the decline of fossil fuels.

The energy company said the coronavirus crisis is likely to have a ‘significant and persistent’ impact on the global economy that will set it on a greener path.

It could trigger permanent changes in people’s behaviour, such as travelling less and a permanent shift away from full-time office working, which would dent demand for transport fuels.

But even if this does not happen and the world continues ‘business as usual’, BP believes oil demand will still peak in the early 2020s and stay broadly the same for the next 20 years.

Looney is trying to transform the oil heavyweight into a green power giant, producing net zero carbon emissions by 2050.

In its annual energy outlook report, BP modelled three scenarios, all of which showed oil demand falling over the next 30 years and renewables taking a bigger proportion of power generation.

In the ‘business as usual’ scenario, in which there is not a lasting hit from the pandemic, oil demand would recover to pre-Covid levels of about 100m barrels per day within a few years.

Consumption will stay there for two decades before falling to about 95m barrels by 2050.

In another scenario, the impact of the pandemic means oil demand would never fully recover to 2019 levels – dropping to less than 55m barrels a day by 2050.

But if there was a much deeper economic fallout and an acceleration of policies and technologies to speed up the transition to renewables, demand would plunge to around 30m barrels a day in 2050.

It makes a marked change from last year, when the firm modelled a scenario that assumed demand could grow steadily to about 130m barrels a day by 2040. Oil prices plummeted from around $70 a barrel to as low as $19 a barrel in April, and it is now around $40.

It has prompted BP to cut 10,000 jobs from its 70,000-strong workforce and halve its prize dividend after it plunged to a £13.5billion loss in the second quarter.

Looney took over from Bob Dudley in February and has unveiled plans that include increasing its investment in low-carbon technology tenfold to £3.8billlon a year by 2030 and to cut its oil and gas output by at least 40 per cent.

Russ Mould, investment director at AJ Bell, said: ‘Essentially the argument seems to be that Covid-19 has accelerated trends that were already in motion – in this case a shift away from oil and gas due to mounting environmental concerns.’