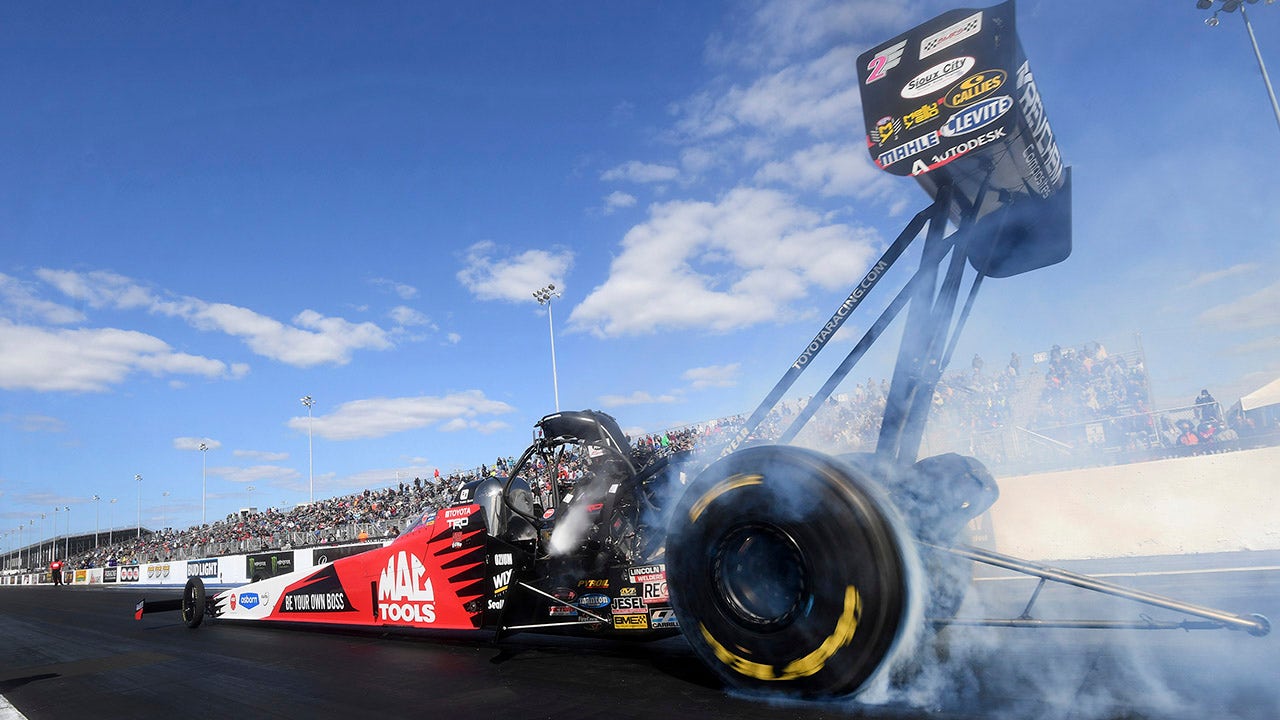 The 840 hp Demon is the most powerful American car ever and the quickest production car in the world on a drag strip. FoxNews.com Automotive Editor Gary Gastelu took it to one to find out what makes it so fast.

Marcus Lemonis first learned the NHRA drag racing series had abruptly lost its title sponsor via Twitter and used the same social media platform to alert the league he was interested in helping.

Lemonis tweeted on Sept. 22 to NHRA that Camping World isn’t “scared of our commitment to racing… let’s sit down and talk sponsorship.” Just 12 days later, NHRA announced a multi-year partnership with Camping World as its new title sponsor.

“This is the power of social media, it really is. Welcome to 2020,” NHRA President Glen Cromwell said. “Marcus is extremely good at positioning himself and his company in a great light on social media and he took advantage of a great opportunity, probably within 24 hours of the news.”

Lemonis took notice the same day NHRA filed suit against sponsor Coca-Cola after Coke severed its 19-year sponsorship agreement that ran through 2023. The suit alleges Coca-Cola, which marketed various products during the deal, “seized on global tragedy, the COVID-19 pandemic, as a pretext” to walk away to save money.

NHRA, like most businesses, has had a turbulent season while navigating the pandemic. The schedule of 24 events was decimated by cancellations, teams struggled to make budgets work and John Force, the immensely popular 16-time Funny Car champion, sidelined his four-car organization when racing resumed in July.

This season will ultimately have just 11 events and the abrupt and unexpected loss of the title sponsor was going to be a significant blow.

Camping World has sponsored NASCAR’s Truck Series since 2009 and Lemonis is already a significant contributor to the motorsports industry. The NHRA sponsorship issue was tagged to him on Twitter by another user and he immediately began his due diligence.

The banter between Lemonis, the NHRA, its competitors and fans at first appeared to be playful with perhaps some potential.

“It was really me flirting more than anything else,” Lemonis said.

Then he began to research the series, had conversations with industry insiders, studied attendance and ratings figures, and sent a team to the Gatornationals in Florida just three days after the Twitter relationship began. Lemonis was not interested in marketing to one audience, and if drag racing catered to NASCAR customers he already served, there was no reason to move forward.

THE NASCAR TRUCK SERIES IS CHANGING ITS NAME — HERE’S WHY

“I was shocked at how the reports came back in almost every instance that the audience and the viewership was different,” Lemonis said. “I had photos and videos provided to me from Gainesville that showed there are far more families and multi-generational families. grandparents, parents, kids, all around campers. And I was very impressed by the amount of diversity, both in gender and race.”

Lemonis brokers deals directly and he rapidly closed the deal. He has seen social media reaction accusing him of “dumpster diving,” but defended his business strategy. Lemonis said he must act in the best interest of shareholders and employees, just as the NHRA is required.

“If you want to be opportunistic in business and have it work for both sides, you do things quickly,” he said.

The new sponsorship was announced during the Midwest Nationals on Sunday and Camping World immediately assumed NHRA’s naming rights. NHRA, five days before it lost Coca-Cola, had reached a multi-year extension with Fox across its networks for the biggest television platform in the sport’s history. On Wednesday, NHRA released a 22-race schedule for next season.

What could have been a disastrous year for NHRA is now three events away from its conclusion. Limited spectators have been permitted and the series takes pride in how well it adapted during the pandemic.

“Our stakeholders, our fans, our race teams, our track partners and our sponsors have all really come together to understand the challenges we’ve faced in 2020,” Cromwell said. “That’s allowed us to race this year, provide great racing for our fans and really set a springboard into 2021.”