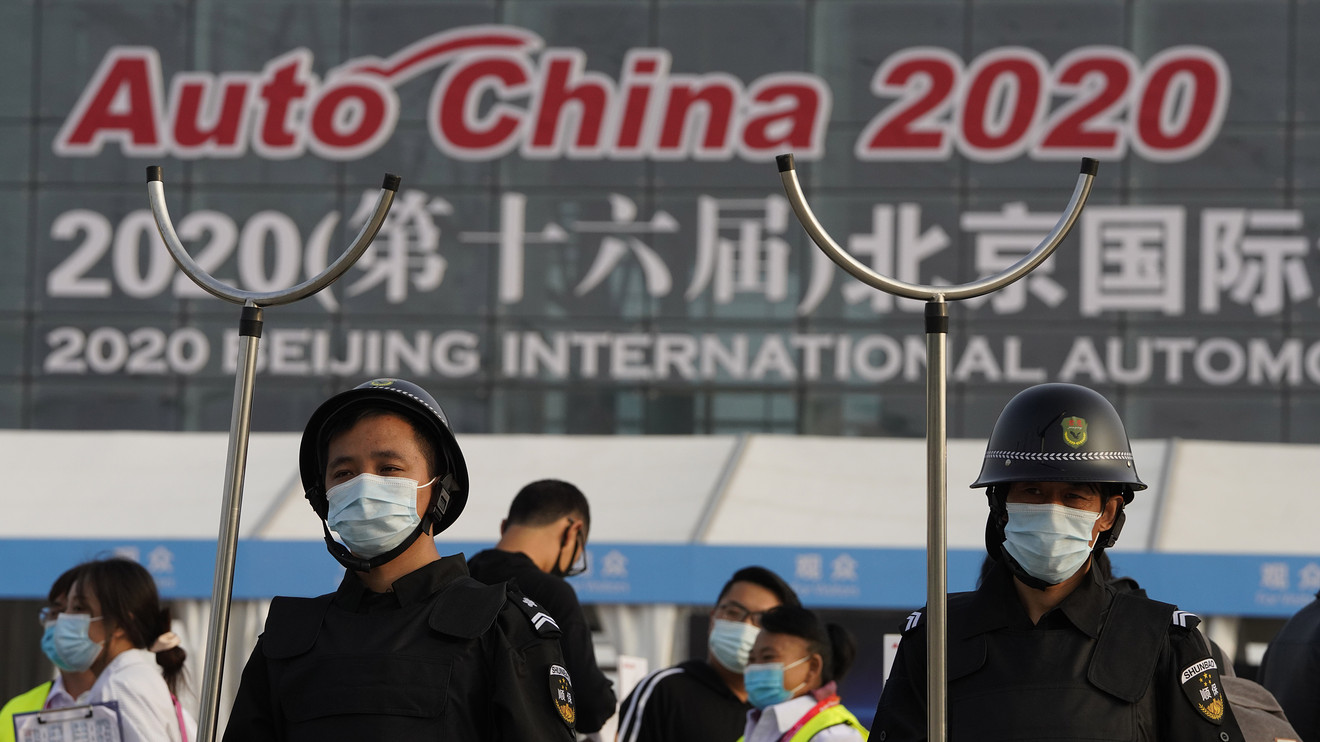 Automakers are looking to China, the first major economy to start recovering from the coronavirus pandemic, to drive sales growth and reverse multibillion-dollar losses.

Auto China 2020, postponed from March, is the first major trade show for any industry since the pandemic began. The ruling Communist Party’s decision to go ahead with it reflects official confidence China, where the pandemic began in December, has the disease under control.

China CEO, Jochen Goller, told reporters who wore masks but stood shoulder-to-shoulder at the event. He paid tribute to Chinese medical workers who “made it possible for us to enjoy this large-scale event today.”

Authorities ordered limits on crowds at the event, which attracted 820,000 visitors at its last installment in 2018. Employees walked through the cavernous exhibition center carrying signs that said, “Be Sure to Wear Masks.”

China’s auto market, the world’s biggest, already has rebounded to sales above pre-pandemic levels. Purchases rose 6% in August compared with a year earlier, while U.S. sales were down 9.5%.

Global and Chinese automakers displayed dozens of electric models, part of a race by the industry to meet Chinese government sales quotas imposed to promote the technology.

Electrics increasingly offer speeds and acceleration to rival gasoline engines in an effort to make the technology a mainstream product. Some promise ranges of up to 600 kilometers (380 miles), or more than the average tank of gasoline, to combat “range anxiety,” or consumers’ fear of running out of power.

showed its all-electric Ariya SUV, which it said can travel up to 610 kilometers (380 miles) on one charge.

“We need to adapt to the Chinese market,” said CEO Makoto Uchida in a news conference conducted by video link from Nissan’s Yokohama, Japan, headquarters.

Uchida said China is a key part of an effort under way to return Nissan to profit after it reported a $6.2 billion loss for the year ending in March.

That plan calls for releasing nine electrified models in China by 2025, according to Nissan senior vice president Sohei Yamazaki.

BMW displayed its iX3 electric SUV, which Goller said will be produced at a factory in China’s northeast for sale worldwide. The company also held the global debut of its M3 sedan and M4 coupe, reflecting the growing importance of China’s luxury market.

The Communist Party wants to make China a leader in electrics and has used subsidies and other support to transform it into the biggest EV market, accounting for about half of global sales. Beijing ended restrictions on foreign ownership of electric vehicle producers in 2018 to spur competition.

China’s young but ambitious brands also are pushing aggressively to extend the range of battery-powered vehicles to appeal to a broader market.

GAC New Energy, a unit of state-owned Guangzhou Automotive Corp. New Energy, is working on plans to export to Europe but has yet to decide on which markets, according to its public relations manager, Wu Shinan. The company’s Aion line includes a pure-electric sedan and displayed a hydrogen fuel cell-powered concept SUV.

Demand for electrics weakened last year as Beijing started to wind down subsidies. They were due to end this year, but regulators extended them at a lower level through 2022 to help the industry weather the pandemic.

Chinese brands also are pressing ahead with plans to export to developed markets despite weak U.S. and European demand.

Chery, one of China’s biggest independent brands, is working on plans to export its X70PLUS, a gasoline-powered SUV, to Western Europe, according to its general manager, Chen Jiacai. He said sample models have been sent to some markets but declined to give other details.

China’s major auto shows, held in Beijing and Shanghai in alternate years, are the industry’s biggest events, attracting every global automaker and dozens of Chinese brands.

This week’s event follows a smaller auto show in July in the western city of Chengdu with 120 exhibitors, equal to about 10% of the size of the typical Beijing and Shanghai shows.