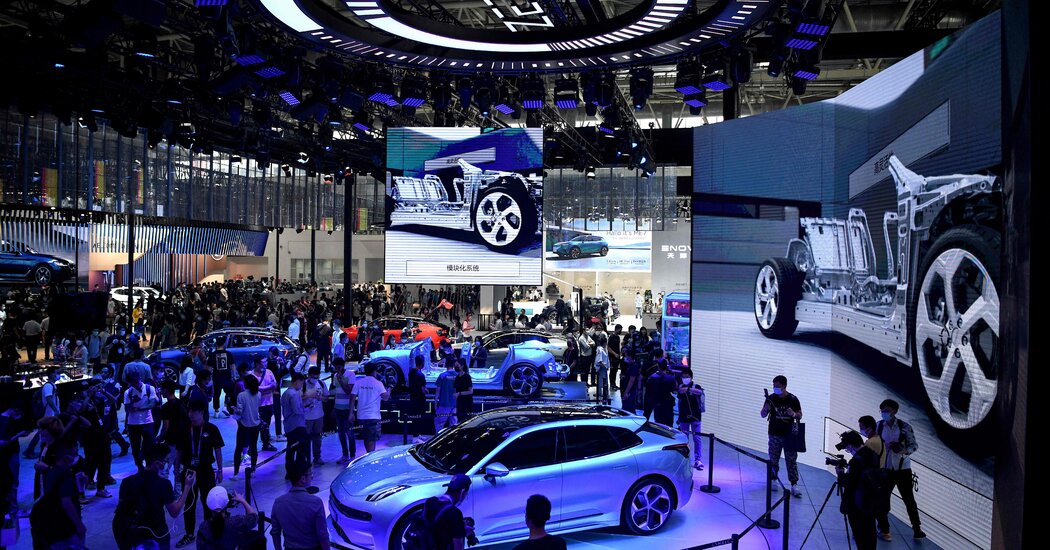 BEIJING — Right before executives and car enthusiasts could gather in Geneva for the big auto show there in early March, the organizers called it off. As the coronavirus spread, other shows followed suit: Detroit, Los Angeles, New York, Paris and São Paulo.

So after a long lull, the first major auto show since the pandemic hit opened this weekend in Beijing, giving automakers a chance to showcase new models and big ideas for the future. Under the pulsating lights, executives and car fans admired new rides from big Western companies like Ford and Volkswagen, and from Chinese rivals. The gleaming sport utility vehicles, sedans and other cars were aimed at China’s consumers, who have emerged from Covid-19 lockdowns with a yearning to spend.

The automakers are chasing people like Ben Cao. Mr. Cao, a 33-year-old Shanghai consultant, and his wife bought a dark blue Porsche Panamera sedan in May to replace their Range Rover Sport, then bought a chalk gray Porsche Cayenne in July to replace their Audi TT Roadster. When cinemas reopened this summer with social distancing, they went to see Christopher Nolan’s “Tenet” and “Eight Hundred,” a Chinese war movie.

When he went shopping a few days ago at elite jewelry stores for a new ring for his wife, Mr. Cao found that other customers had already been there.

“For a lot of extremely expensive jewelry, they were out of stock,” he said.

The Chinese economy shrank in the first quarter, its first contraction of the modern era, but now has resumed its surging ways. The nation’s factories are once again churning out goods for the world. Plentiful government lending is fueling big construction projects. Chinese officials are expected to report next month that growth accelerated during the July-to-September quarter, even while the rest of the world limps along.

The recovery in spending started with the affluent after coronavirus lockdowns last spring and has begun spreading to middle-class families, but many low-income workers are still struggling. Retail sales grew 0.5 last month compared with a year earlier, the first increase this year. Xibei, a national chain of mid-priced restaurants that were mostly empty last spring, said that its sales from Sept. 18 through 24 were up 4.5 percent compared with the same days last year.

China’s wealthy are willing to shop. Restaurants, hotels and airports are crowded again. Business hotels in Beijing have nearly doubled room rates by eliminating pandemic discounts and filled up anyway. And while practically all international travel is still suspended, big airports in cities like Guangzhou and Chongqing have almost as many domestic travelers as last year.

Spending by customers like Mr. Cao has lifted sales for luxury carmakers like Porsche, which has even flown electric Porsche Taycans from Germany for sale, and NIO, a Chinese electric car competitor to Tesla. “Life continues without any big impact from the pandemic,” said William Li, NIO’s founder and chief executive.

A big question, when China’s middle class would join in, seems also to have been answered. While sales of large and luxury cars recovered swiftly in April, compact car sales stayed weak through much of the spring and summer despite heavy price discounting by automakers. Now they have almost caught up to last year’s pace. Public concerns about catching the virus on mass transit helped car sales in the spring, but sales have stayed strong in recent weeks even as those concerns faded.

“The cheaper vehicles are coming back,” said Yale Zhang, the managing director of Automotive Foresight, a Shanghai consulting firm.

Edward Cai, a 26-year-old Beijing consultant, spent little in the spring. Now he is going to movies — he liked a just-released remake of “The Invisible Guest” but not “Mulan,” the China-centric epic from Disney. He even splurged on a vacation a month ago to southernmost China.

“Much of my spending was put on hold during the epidemic,” he said, “but it’s coming back.”

Not all of China’s spenders can say the same. Many low-income workers and recent college graduates have not yet found new jobs after coronavirus lockdowns or are laboring at reduced hours with lower pay. Businesses and consumers in many inland cities are struggling.

“The richest regions are outperforming across the board,” particularly export regions along the coast, while the rest of the country lags, said Derek Scissors, the chief economist of the China Beige Book economic analysis.

China also has one of the world’s highest levels of income inequality, rivaling countries like Brazil. Prosperous families play a disproportionate role in the Chinese economy as a result.

Consumer research by multinational companies suggests that these families are engaging in what they call “revenge spending” after surviving the fear and death of the pandemic.

“You discover that life comes to an end so easily, so you want to give something to yourself,” said Jens Puttfarcken, the chief executive of Porsche’s China operations.

It helps that China has tamed the coronavirus within its borders. By contrast, European nations are closing bars and restaurants in response to an autumn wave of infections. In the United States, layoffs remain widespread and many businesses have closed.

The Beijing auto show, held every other year in alternation with the Shanghai auto show, has proved a fairly good lens through the years for focusing the strengths and weaknesses of the Chinese economy. It has become more and more dominated by luxury brands, by vehicles tailored to Chinese tastes and by increasingly sophisticated Chinese manufacturers with ambitions of creating global brands.

The show has also showcased China’s transformation from a technological laggard to the world’s largest market for electric cars, which customers have been snapping up in recent months. Ford unveiled on Saturday a Chinese version of its new electric Mustang. NIO announced an upgrade to the self-driving software on its electric cars to allow them to merge with highway traffic and exit by themselves.

Polestar, a joint venture of Volvo Cars and its Chinese parent, Zhejiang Geely, announced plans for mass manufacture of electric cars next year in Chengdu, China. Thomas Ingenlath, Polestar’s chief executive, said the company was building an entirely new factory that it intends to run only on renewable energy.

Mr. Ingenlath was one of a handful of top auto executives who flew to China for the show. Just released from the hotel where he served two weeks in complete isolation after his arrival, he expressed amazement at the differences in daily life between China and Europe because of China’s unusual success in suppressing the coronavirus.

“In Europe, you would very much avoid handshaking, even though it is the home of the handshake — I’m surprised it is not an issue here,” he said. “People are less worried.”

More infections could still emerge, especially since the virus was stopped so quickly that few people had a chance to build immunities. China has responded to this risk by keeping some precautions in place, even as others, like wearing face masks, have become somewhat less common, especially outdoors. College students are barred from leaving campuses for almost any reason. China is also preparing an extensive campaign this autumn to administer flu shots, to minimize how many people show up at clinics and hospitals this winter with symptoms that might be mistaken for those of the new coronavirus.

Another fear lies in the financial system. China’s state-owned banks flooded the economy last spring with huge loans at low interest rates, adding to longtime worries over bad debt. Shares and bonds of China Evergrande Group, one of the country’s largest real estate developers, fell sharply last week on concerns about how it will manage debts of over $120 billion.

A third worry lies in the health of small and midsize enterprises. These lack the political connections often necessary to obtain loans from the state-led banking system. Another large outbreak this winter could yet wipe out many entrepreneurs.

Lingering social distancing rules mean that service industries are not faring quite as well as manufacturers. The box office at Chinese cinemas was down 57 percent in August from the same month a year ago, although this mainly reflected rules that reduced cinema capacity.

But many of the worries seemed far away at the auto show.

Liu Xiaozhi, a former car engineer who now serves on corporate boards, said that the country’s success against the coronavirus had allowed consumers to resume spending money freely once again.

“In China,” she said, “it is actually quite back to the way it was before.”