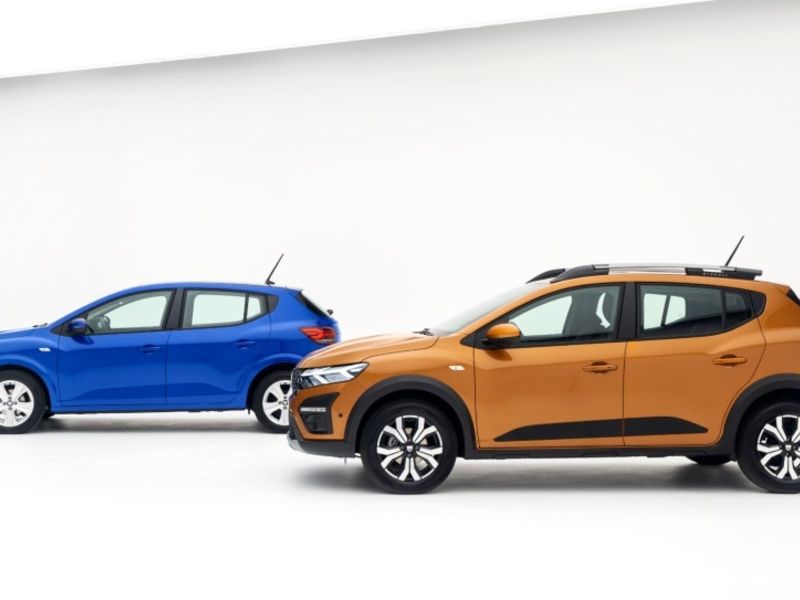 The new models are now on the same Renault-Nissan Alliance CMF platform as the latest-generation Renault Clio and Captur, and they use Renault’s 1.0-liter, three-cylinder gasoline engines. The platform is stiffer than the current Nissan-derived B0 underpinnings and includes new electronic architecture to enable more connectivity and driver-assistance features.

Also new are a number of comfort, safety and convenience features, including an optional continuously variable transmission (CVT), sunroof and backup camera, as well as LED lights, electric steering and keyless ignition. Dacia has kept its prices low by using proven off-the-shelf technology from the alliance, and executives said that the costs of these technologies had fallen enough for them to be included on the new Dacias.

The new models are crucial for Dacia, as the small cars make up 32 percent of the brand’s 6.5 million sales since 2004, when the Logan was introduced to kick off Renault Group’s low-cost Global Access model range.

Dacia did not release prices, but the Sandero undercuts most of its rivals in the small car segment by several thousand euros. A base Sandero starts at 8,290 euros ($9,635) in France, a figure that can drop to as low as 5,290 euros if buyers trade in an older, higher-polluting vehicle.

Sales will start at the end of this year.

After nearly uninterrupted sales growth since 2004, Dacia lost ground in the first half of 2020. Sales in Europe, the EFTA countries and the UK were down by 41 percent from January to August, according to industry group ACEA, while the market as a whole lost 33 percent. Among other mass-market brands, Skoda’s sales fell 23 percent, Renault’s volume dipped 31 percent, Fiat was down 37 percent and Hyundai-Kia slipped 28 percent.

Dacia says the Sandero and Sandero Stepway variants are the best-selling models in the retail channel in Europe, as Dacia does not compete in the fleet,  short- or long-term sales channels.

According to date from JATO Dynamics, the Sandero/Sandero Stepway ranked fourth in the small car segment in 2019, with 225,258 sales, a 4.7 percent increase from 2018 in a segment that declined by 5.4 percent. It was just 2,000 sales behind the third-place Ford Fiesta. The Clio ranked first, with 317,741 sales.

Dacia’s design team, with input from members in Romania and France, sought to differentiate the Sandero models from the Clio by emphasizing toughness and durability. The Sandero is 10 mm lower and has a wider track than the current model, although the overall dimensions are the same. The windshield has a steeper rake and the wheels have been moved out to be flush with the body for better aerodynamics and fuel efficiency.

With crossovers and SUVs taking sales from sedans and hatchbacks, Dacia has sought to position the Sandero Stepway as a true crossover, by raising the ride height 41 mm from the Sandero with larger wheels, adding larger skid plates and rubberized wheel-arch trim, and giving the Sandero Stepway its own hood and front-end design, though it uses the same headlights as the Sandero. Another feature is roof bars that swing inward to form a rack that can carry loads up to 80 kg, Dacia says.

Sandero Stepway models make up 65 percent of all Sandero sales.

The Logan sedan, which is sold mainly in eastern Europe and the Balkan states, has grown by 36 mm in length, and kneeroom for rear passengers is 42 mm greater, Dacia says. The trunk space, at 528 liters, is 18 liters more than the current Logan, and the load-over height is 19 mm lower.