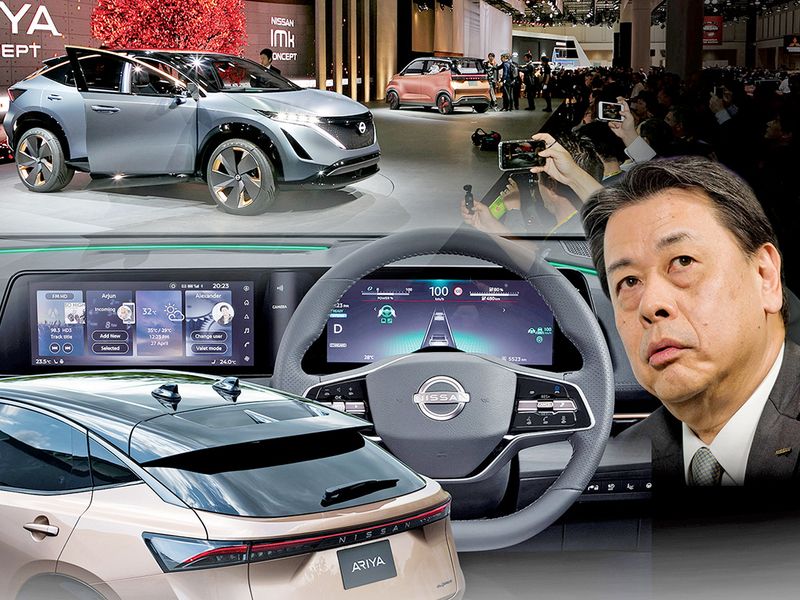 The Ariya headlines Nissan’s new “A to Z” marketing campaign, which the company hopes will refocus customers on Nissan’s upcoming products after the sordid arrest of former Nissan and Renault Chairman Carlos Ghosn threw the companies and their partnership into chaos for much of the past year and a half.

The “Z” stands for a next-generation Z car that was previewed Wednesday, Sept. 16.

Whereas the first-generation Leaf was simply meant to establish a presence in the EV market, and the second generation focused on improving performance, the Ariya aims to build the image and generate buzz. In the U.S., Nissan hopes it plays a critical role in the drive for what it has been calling “quality sales.”

“This is the flagship of our new Nissan,” Gupta said. “We have to demonstrate the capacity of Nissan to go to the next generation. We have to graduate from a ‘good brand’ to a ‘great brand.’ We can only make it by three things — demonstration of new products, demonstration of new technology and discipline in the way we do the business. It’s very simple.”

Uchida said the Ariya’s early unveiling — a year before starting sales in the U.S. — was meant to give Nissan time to telegraph the vehicle’s value and have customers warm to the upmarket move.

Nissan insists customers worldwide are more interested in EVs and that technological improvements are putting range anxiety in the rearview mirror. But the company also is more circumspect now than it was when it brought the Leaf to market and launched three assembly plants around the world to build the vehicle.

For now, Tochigi will be the sole source of the Ariya, though a plant in China may someday come online.

Gupta declined to give a sales target for the new model but clarified that it won’t be a volume player like the Sentra, Rogue or Altima.

Under its Nissan Next business plan, the automaker wants to ramp up to selling 1 million electrified vehicles in the fiscal year ending March 31, 2024. But the large majority of those are not expected to be full battery-electric vehicles, but rather vehicles equipped with Nissan’s e-Power series hybrid system.

The new CMF-EV platform will make it easier for Nissan and Renault to spread volume across the alliance, said Ivan Espinosa, Nissan’s senior vice president in charge of global product planning.

“There’s a lot of flexibility that allows the platform to provide a wide spread of choice for the companies,” he said. “You can play with the wheelbase. You have specific tuning of the powertrain, you have specific tuning for the chassis elements. We will keep building on this architecture. You can think of doing cars a bit larger, which could come to the U.S. eventually.”

Espinosa said the U.S. is warming to electrification, but customer tastes are changing. Buyers want vehicles every bit as mean as they are green. Thus, the U.S. marketing message for the Ariya will be centered on “confidence” and “excitement,” Espinosa said.

But Nissan now faces a rush of new EV competition from well-endowed companies, including Tesla, Volkswagen and General Motors. Even EV skeptic Toyota plans to get into the game.

But Nissan executives say that surge in competition is proof that EV demand is finally reaching a critical mass.

Since unveiling the Ariya in mid-July, Nissan says the vehicle has attracted more than 35,000 hand- raisers worldwide. The U.S. has the second-highest number, behind Japan.

“This is the most advanced car that Nissan has done in its history,” Espinosa said. “Customers are starting to be much more interested in these technologies. There is no doubt about it.”

Peter Sigal contributed to this report.