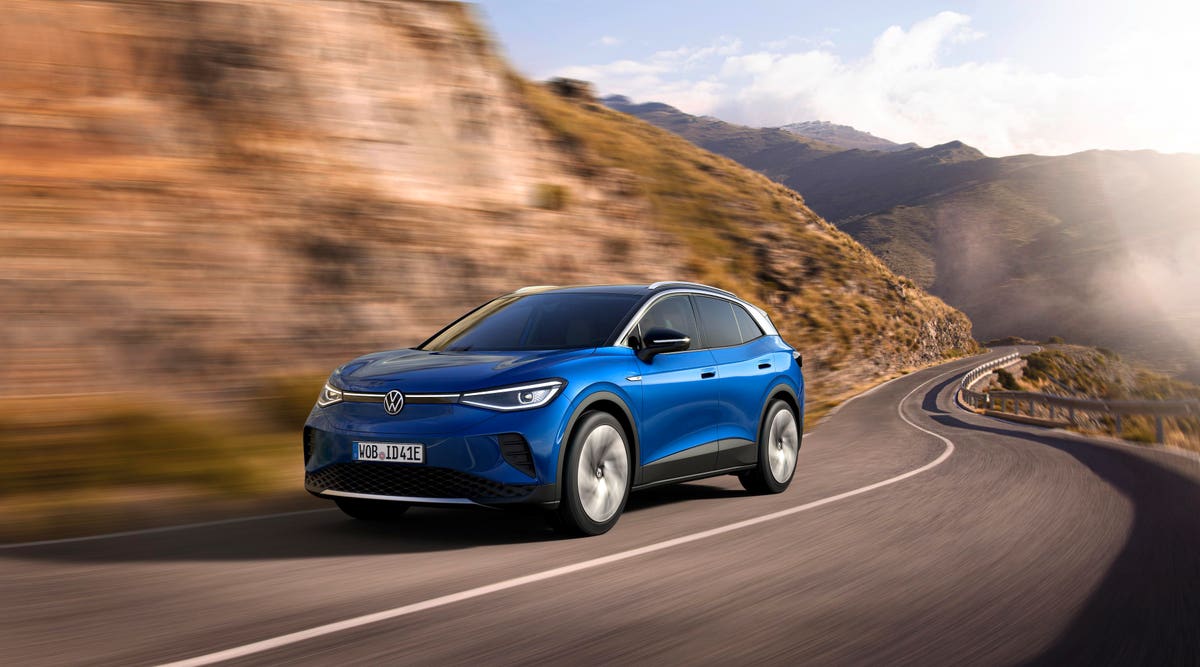 It will arrive in North America early next year with an EPA-tested 250-mile range, priced from around $40,000, which will include the first three years of charging on the Electrify America network.

It follows on the heels of the ID.3 hatch and is the second car to reach production from Volkswagen’s MEB (Modular Electric Matrix) architecture.

The German company, still scrambling to recapture public trust after its Dieselgate emissions-cheating scandal, now has four EVs on the market in Europe, ranging from the E-Up city car and the E-Golf to the ID.3 and ID.4.

It has at least three more Volkswagen-branded MEB cars coming, ranging from the ID.Buzz microbus to the ID.Vizzion limousine.

A year after the ID.3 was shown at the Frankfurt auto show, the ID.4 arrives as a significantly larger and more expensive electric car.

The two launch models, the ID.4 1st and the €59,950 ID.4 1st Max, are both based on the ID.4 Pro Performance version of the SUV, and other versions will arrive above and below it in the seven-year lifespan of the ID.4.

Here in the US, the ID.4 will arrive as an import from Germany, then switch to local production from Chattanooga, Tennessee, early in 2022.

Built in the carbon-neutral plant in Zwickau in the old East Germany, the ID.4 will soon be made in North America and China as well, and is expected to be a huge seller for Volkswagen.

It will form the basis of Audi’s Q4 e-tron, Skoda’s Enyaq and Cupra’s Tavascan EV SUVs, and could even be targeted by Ford, which bought a license to produce 600,000 cars off the Volkswagen MEB architecture.

Engineered in both left- and right-hand drive, the ID.4 sports far more practical interior space than its little brother, though it’s actually slower.

It is based around a 77kWh lithium-ion battery between the axles and a 150kW / 310Nm (201 hp / 228.6lb/ft) electric motor mounted in the rear and driving the rear wheels through a single-speed transmission.

The battery pack actually has an 82kWh capacity, though Volkswagen chooses to only use 94 percent of that to protect battery longevity, hence it is quoting only 77kWh.

The permanent-magnet synchronous motor, its single-speed gearbox and the power electronics are all integrated into the rear axle, and to balance that, the air conditioning compressor and other ancillaries sit at the front.

There is an all-wheel drive, dual-motor version of the ID.4 planned for midway through next year.

Volkswagen claims the ID.4 will run to 62mph (100km/h) in 8.5 seconds, which is around 0.6 seconds slower than the ID.3 with the same motor and battery pack.

The lighter ID.3 Pro, with the smaller 58kWh battery pack is a full 1.2 seconds faster to 62mph.

The two least-powerful motors use a lighter 52kWh battery, rather than the 77kWh version.

There is also a plan to introduce stronger all-wheel drive versions, with larger motors on the rear axles. The cheapest AWD ID.4 will have 195kW and the range should top out at 225kW.

Where the ID.4 really scores against its little bro is in size and space.

The battery is made up of 12 modules, each with 24 lithium-ion pouch cells, all sitting on a baseplate with integrated water cooling channels.

The ID.4 can also add 320km of range in just 30 minutes via its 125kW charging capacity, and Volkswagen guarantees it will retain at least 70 percent of its charging capacity after 160,000km.

The power electronics converts the DC power in the battery to the AC power needed by the electric motor, and there’s a parallel 12-Volt electrical system that is fed by a lower voltage DC/DC converter.

Running on standard 20-inch alloy wheels, the ID.4 claims a 210mm ride height, though having a towing capacity of just 1000kg may be a reverse-clincher for some customers, though this size of car rarely tows much.

More luxurious (thankfully) inside than the ID.3, the ID.4 uses a 12-inch touchscreen display atop the dashboard, but Volkswagen has concentrated more on refining its voice-recognition software. There will also be an augmented head-up display and the launch vehicles will all arrive with a full panoramic glass roof.

It’s the second Volkswagen-brand chip in the Volkswagen Group’s €9 billion electrification push between now and 2023, which will spread across all of its brands except Ducati and Bugatti.

It has borne fruit at Lamborghini with its Sian concept car, and Porsche and Audi have been the stars of the EV show within the Group.

But Volkswagen now plans on selling 26 million EVs on its MEB architecture alone (the Taycan, e-tron and e-tron GT use more premium architectures), with 75 EV models planned for sale before its so-called “first EV wave” ends in 2029.