HornBlasters brings train sounds to cars, and even a stadium 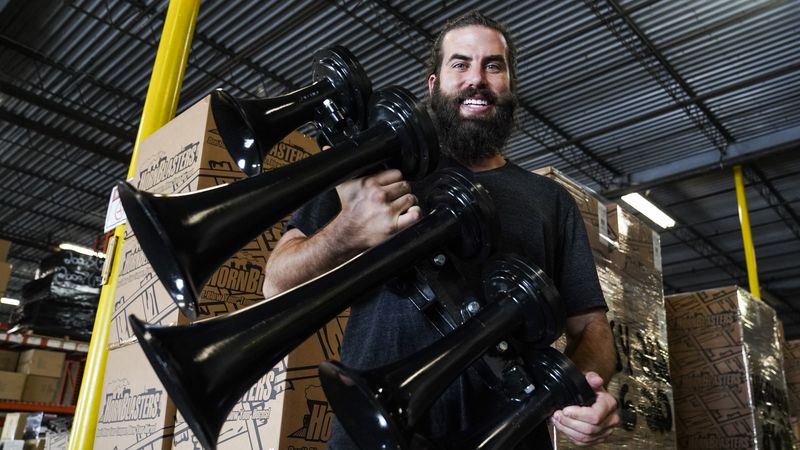 The business first began in an apartment. Now, it’s located in an 88,000 square-foot warehouse.

In the early 2000′s, Matthew Heller began making car horns for family and friends. He began selling them online, and his business, HornBlasters Inc., grew so much he had to quit his former job.

Since then, the 38-year-old Tampa entrepreneur has sold thousands of horns, including to the home of the Atlanta Falcons, Mercedes Benz Stadium. Even as the stadium seats remain empty during the pandemic, the horn continues sounding to rally the team during home games.

“It’s just really nice to be selling a product that is so well-received and appreciated,” Heller said. “Everyone just really enjoys it.”

Ever since he was a kid, Heller has been a fan of trains. After outfitting his lowrider blue pickup truck with a train horn, he found a niche business that’s allowed him to profit off his childhood passion and grow a community of horn fanatics.

While working at Home Depot, Heller founded HornBlasters in his free time. The business refurbishes old train horns bought from scrapyards and outfits them to be installed on cars.

It also sells plastic horns, which are cheaper and slightly less loud. They can be installed in a truck’s spare tire holder.

The horns range in price from roughly $50 for a motorcycle to $2,000 for a larger system. The cheapest car horns that sound like trains sell for about $500.

Michael Walter, 42, first discovered HornBlasters on Instagram and visited the warehouse Wednesday in search of a horn for his new truck. Walter said he knew his 15-year-old son would be a fan of the horn, though his wife and his five daughters might not be.

“There’s a lot of people texting and driving nowadays, so I think that definitely gets their attention if they’re coming into my lane,” he said.

At the beginning of June, Heller said, HornBlasters relocated from Zephyrhills to its current location at 6511 N 54th St. in east Tampa. In that time, the business quadrupled its space.

Heller grew a fanbase for his horns by posting funny videos to the internet. Before YouTube existed, his biggest business expense was internet hosting, which he used to upload the videos. The company’s YouTube channel includes some prank videos, where drivers scare passersbys and make them jump by honking their horns.

The company has drawn both fans and haters, and HornBlasters posts mail from both on its website. The business has even drawn attention from former basketball star Shaquille O’Neal, who posted about the company on Instagram.

Florida state law says “No horn or other warning device shall emit an unreasonably loud or harsh sound or a whistle.” Heller said the company encourages its customers to just be thoughtful about how they use their horns.

For many years, the business has catered to young men in particular. Even so, its demographic has begun to shift over the years with more distracted drivers on the road, said Greg Vasilakis, the company’s director of e-commerce and Heller’s stepbrother.

“Before it was just kind of our demographic was 18 to 28 (year-olds), people with lifted pickup trucks, but we see now soccer moms, retirees, people from all walks of life,” he said.

Vasilakis said one of his favorite parts of working at the company has been seeing the enthusiasm around its products, which have grown a following.

“I think that our customers are not just customers,” he said. “They really are kind of like fans.”