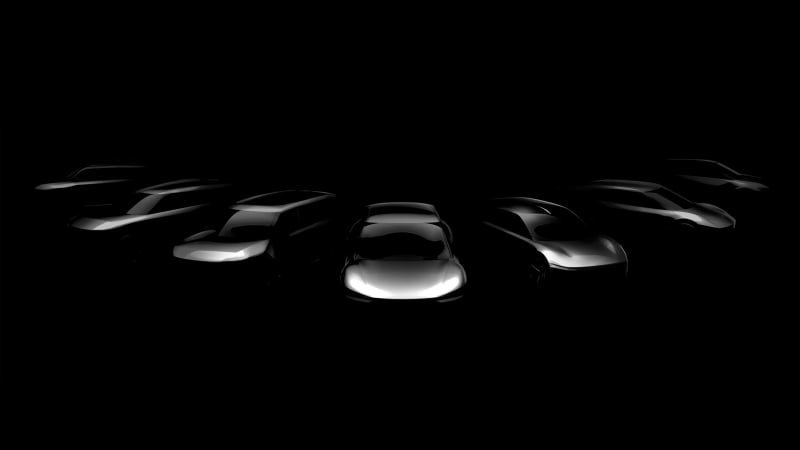 Kia released a dark design sketch to shine a sliver of light on the seven electric cars it plans to launch by 2027. It hopes that battery-powered models will represent at least 25% of its global sales by 2029.

Long on vision but short on details, the image shows the vague outline of seven vehicles that will join the South Korean company’s range in the coming years. Company CEO Ho-Sung Song noted the models will be positioned in a variety of market segments, and the image depicts several different silhouettes. The cars on the left look like SUVs and crossovers, while the ones on the right seem to ride a bit lower; there may even be a sports car in the mix. All are linked by a crease-free design, though keep in mind they’re still under development.

Kia is not a newcomer to the electric car segment. It released its first series-produced EV, an electric version of the Ray sold in global markets, in 2011, and its current range includes battery-powered variants of the Soul and the Niro. The aforementioned septet represents the next step in its offensive. Its members will be standalone EVs, meaning they will not be based on gasoline-powered cars, and they’ll all be part of the same family. In a way, Kia is following the same path as Volkswagen, which chose to group its future EVs under the ID umbrella.

We’ll get our first taste of Kia’s new range of electric models when the firm releases a car code-named CV in 2021. It was designed for “many regions globally,” though whether that includes the United States is up in the air, and it will usher in the design language that will characterize the line-up. Unofficially, we hear it will arrive as a sedan-SUV cross that will draw inspiration from the Imagine concept introduced at the 2019 edition of the Geneva auto show. Croatia-based Rimac (which Kia has invested in) will play a role in the development process.

At the other end of the spectrum, Kia is working on a rugged, body-on-frame pickup that’s about as big as the Ford Ranger. It could spawn a large SUV positioned above the Telluride as an alternative to the Chevrolet Tahoe.