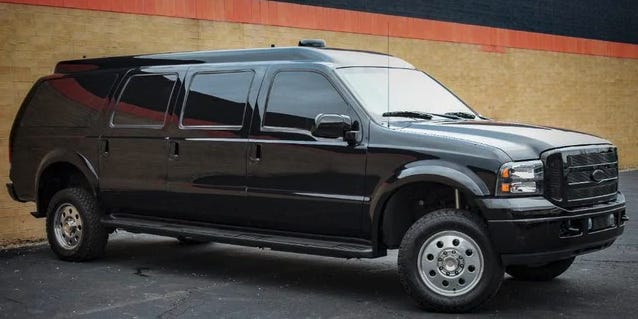 If you’re in the market for a vehicle that’s built like a tank, has an interior fit for royalty, and costs about the same as a Toyota Land Cruiser, today may be your lucky day.

A swanky, custom-built, armored Ford Excursion limo has hit the market for just $84,000 through dealer Prestige Auto Credit. What’s more, it cost more than $600,000 and was owned by the King Abdullah II of Jordan, according to the selling dealer.

The SUV’s royal provenance helps to explain its nearly $200,000 in armoring upgrades, which include ballistic glass, electrified door handles, and an air-filtration system that protects against chemical, biological, or nuclear attack.

As one might expect from a vehicle owned by a monarch, the Excursion’s interior isn’t too shabby either, having been stretched and packed full of luxury upgrades.

Sneak a peek of the surprisingly cheap royal ride, first spotted by The Drive, below.