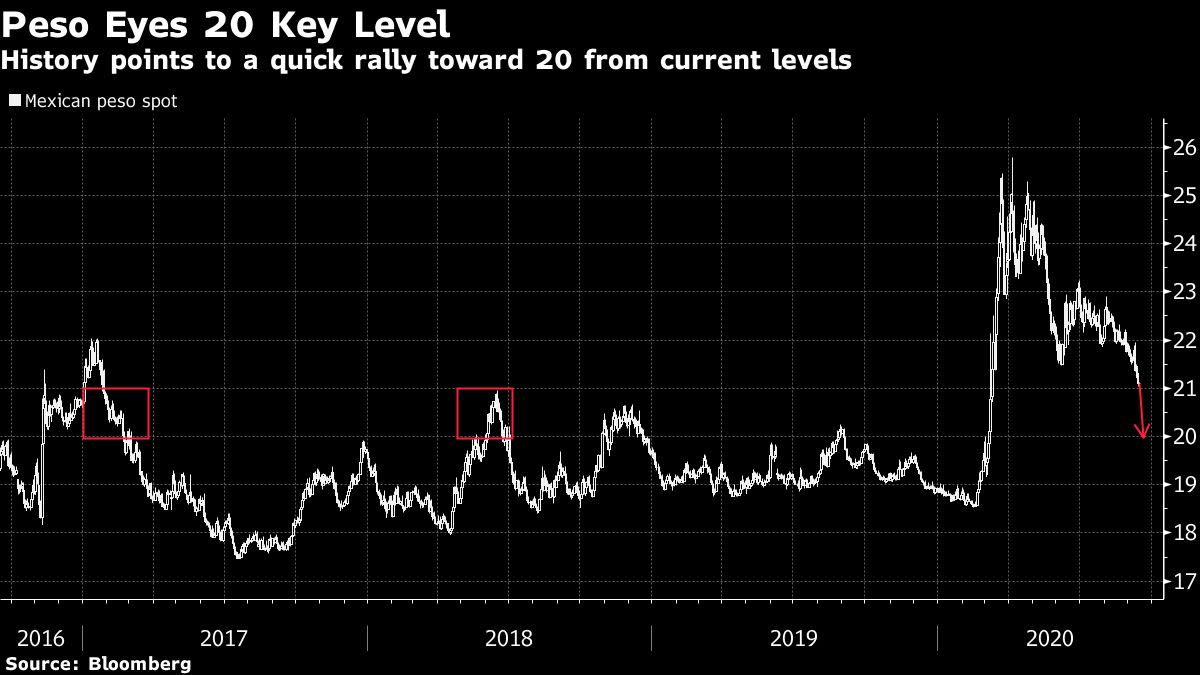 (Bloomberg) — The Mexican peso is trouncing its global peers this quarter and analysts at Standard Chartered and Rabobank say the currency is poised to extend its rally through the end of the year.

Since the end of June, the peso has appreciated almost 10% against the dollar, the best performance among about 140 currencies tracked by Bloomberg. The peso has also delivered the No.1 carry trade — the gains made by borrowing dollars and buying short-term peso-denominated securities — a reward for investors with the stomach to go in after a precipitous 18% selloff in the first half of 2020.

The peso jumped in recent months amid a decline in the dollar, getting an extra lift from bets on a manufacturing revival and Mexico’s relatively high interest rates. The rally has created technical dynamics that point to further gains ahead, and analysts say a hawkish stance from the central bank should preserve the peso’s appeal to carry traders.

“The Mexican peso is attractive along both financial and fundamental characteristics,” said Ilya Gofshtyen, a strategist at Standard Chartered in New York who predicts the peso will gain about 5% to end the year at 20 per dollar. “The carry is of course one variable, but Mexico also stands to benefit from the manufacturing recovery globally, and the sharp rebound in the U.S. auto sector in particular.”

Accelerating inflation has given policy makers little choice but to maintain some of the world’s highest interest rates, and economists surveyed by Citibank predict just a slight cut by year end. In a world flooded by liquidity and negative interest rates in many developed markets, Mexico’s 4.5% benchmark holds plenty of appeal to carry investors.

Falling currency volatility at the same time is making long peso bets a safer choice. One-month dollar-peso implied volatility slumped from 18.8% on June 30 to 14.7% by end-July and 13.3% on Aug. 31, the lowest month-end reading since January. That corresponded with a 3.2% spot peso rally in July, followed by a 1.8% advance in August.

The dynamic helped the peso strengthen past its 200-day moving average last week, the first time that’s happened since March. Christian Lawrence, an analyst for Rabobank in New York, says breaking the barrier gives the currency a clear path to 20 per dollar.

The carry “is still looking good, which is why the peso is performing well,” Lawrence said. He predicts the currency could appreciate to 20 as soon as October, yet potential spikes in volatility could serve as speed bumps along the way.

The biggest lift the peso received this quarter came from the depreciating U.S. dollar. But for the rest of the year, the top driver will be Mexico’s high interest rates, according to Sacha Tihanyi, the deputy head of emerging-markets strategy at TD Securities in Toronto.

The peso’s strength will likely continue into the end of the year, “but at a more moderate pace,” he said. “The yield attractiveness for the peso remains a very key feature of its performance.”