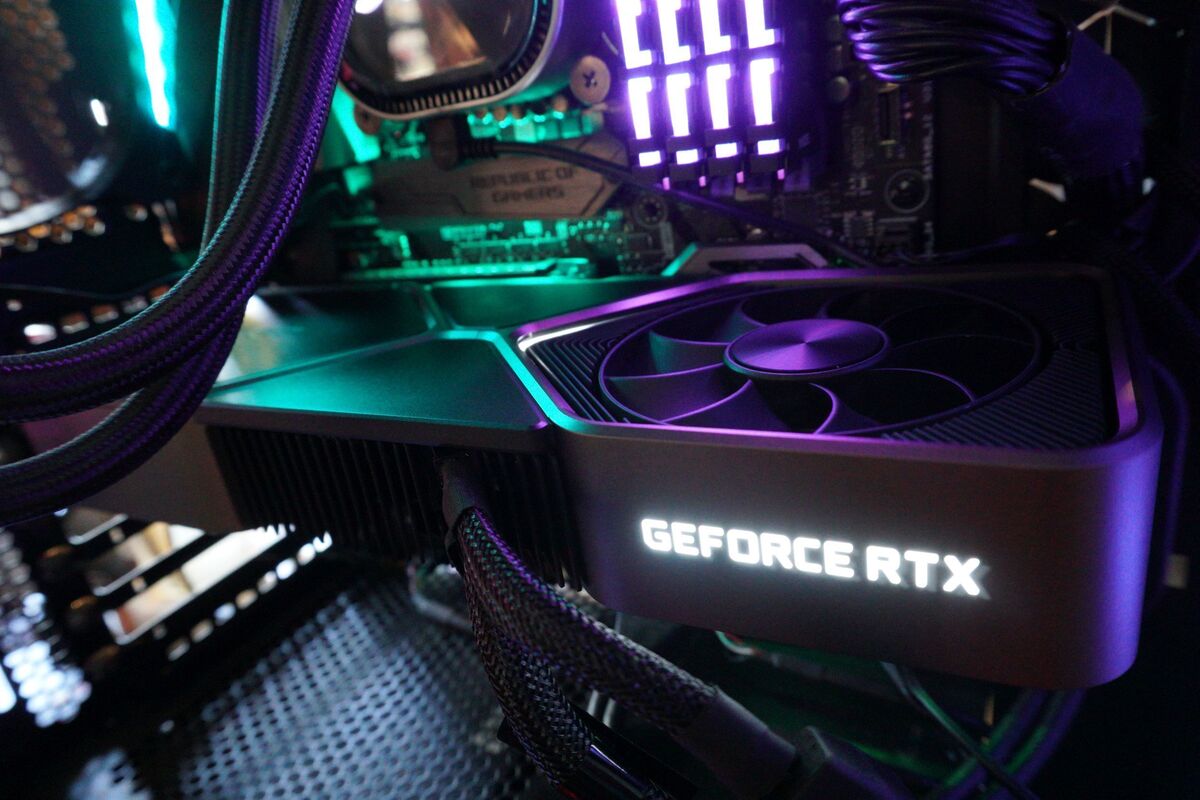 Nvidia promised that the Ampere GPU-powered RTX 30-series GPUs would be the company’s “greatest generational leap” ever, and it wasn’t exaggerating. The $699 GeForce RTX 3080 Founders Edition absolutely demolishes its predecessors in performance while working in all sorts of technological advances. It’s one of the best graphics card upgrades we’ve seen in a long, long time.

You can read every nitty-gritty detail in our comprehensive review of Nvidia’s GeForce RTX 3080 Founders Edition. But if you don’t feel like sifting through thousands of words of technical and testing details, here are the five key things you need to know.

Nvidia’s GeForce RTX 3080 Founders Edition whups on everything that came before it. If you want to clear 60 frames per second at 4K or test the limits of a 144Hz, 1440p monitor with every visual setting cranked to the maximum, this is the card you want (unless you’re holding out for the 8K-capable $1,500 GeForce RTX 3090 coming next week, that is).

The GeForce RTX 3080 FE blows away the RTX 2080 at 1440p too. The lead actually diminishes a bit, because this card being so fast that even an Intel CPU overclocked to 5GHz struggles to feed frames to it fast enough. It’s an excellent option for a 3440×1440 ultrawide monitor that splits the difference between 1440p and 4K, though, as you’ll see in our follow-up testing later this week.

Say goodbye to concerns about lowered resolution in ray traced games, which plagued the original generation of RTX GPUs. In the handful of ray traced games we tested with Nvidia’s Deep Learning Supersampling (DLSS) technology active, playing at 1440p and even 4K at over 60 fps is possible with the cutting-edge lighting technologies enabled.

All that said, the vast majority of gamers use a 1080p monitor, and the GeForce RTX 3080 would be an overkill purchase to pair with an HD display. If you keep visual settings cranked to Ultra at 1080p with this beast, the CPU becomes the bottleneck more often than not. Yes, the GeForce RTX 3080 still maintains a sizeable advantage over the RTX 2080 at 1080p, but the overall margin of victory plummets precipitously, and there’s no tangible performance lead whatsoever in some games.

If you have a 60Hz to 144Hz 1080p display, you’d probably be better off opting for a cheaper, but still plenty fast graphics card (though you’ll probably want to put off upgrading until cheaper RTX 30-series or next-gen Radeon rivals start rolling out).

That said, the RTX 3080 FE could give competitive esports gamers an edge if you plan on cranking down visual settings to push (ugly) frames as high as possible, especially paired with a 240Hz or 360Hz monitor. The company’s new Nvidia Reflex technology helps you achieve even lower latency in esports games where you’d drop visual settings for maximum responsiveness, in games that support the new API. We haven’t tested the GeForce RTX 3080 with Reflex or a 240Hz-plus monitor yet, however.

3. This smoking-fast GPU needs a lot of power

Pushing frame rates so high requires compromise, however. Nvidia made technological improvements to the Ampere GPU architecture that make it more efficient than previous-gen RTX 20-series GPUs, and the company heavily optimized the Founders Edition design. That said, the RTX 3080 still stresses your power supply more than any prior GeForce GPU.

In our whole-system power tests, the GeForce RTX 3080 Founders Edition draws 50 watts more than the former 2080 Ti flagship, over 100W more than its direct 2080 predecessor, and an eye-opening 200W more than the GTX 1080. Custom versions of the card revealed thus far are all massive and equipped with two or three 8-pin power connectors. They could push power demands even further, especially when overclocked. Nvidia’s Founders Edition sticks to reference speeds.

It’s worthwhile for the ludicrous performance on offer, in our opinion, but you may need to upgrade your power supply to feed the RTX 3080. Nvidia rates the total board power for the Founders Edition at 320W—more than the RTX 2080 Ti’s 260W, and nearly 100W more than the RTX 2080’s 225W rating. Appropriately, the recommended power supply wattage for the RTX 3080 FE is 100W higher than the 2080’s. Nvidia says you’ll need a 750W PSU for this card.

Taming this much power takes more work that before, too. Nvidia introduced a wholly redesigned Founders Edition cooler for the RTX 30-series, featuring a radical new “flow-through” push-pull fan design.

The fan at the rear of the system stays in its normal place, embedded in the shroud at the bottom of the card. The front fan moves to the top of the graphics card, where you’d normally see a backplate or bare PCB. The rear fan pushes air through the rear I/O bracket on your card, while the top-mounted front fan pulls cool air up through the FE’s substantial heatsink fins and into the top of your case, where your case fans can exhaust the hot air out the back of your systems.

It’s weird, but it works. The GeForce RTX 3080 Founders Edition tops out at 79 degrees Celsius under load (comparable to past Founders Edition models), but it runs noticeably quieter. Custom versions of the RTX 3080 will still probably run cooler. This gets the job done very well, though.

The Founders Edition card bristles with thick black heat fins enshrouded by a gorgeous, pewter-colored wraparound shroud. A white illuminated “GeForce RTX logo” on the edge serves as a cherry on top. Nvidia’s graphics card is drop-dead gorgeous and feels dense in your hand.

It’s not all good, however. The heavily integrated design will be a nightmare to tear apart, while the flow-through cooler could prove tricky in small-form-factor systems. Nvidia also used a shortened custom PCB for its Founders Edition so it could squeeze in the unique flow-through cooling design. That necessitated switching to a custom 12-pin power connector. The adapter required to connect it to a pair of 8-pin power connectors is too short, too bulky, and sticking out from the middle of the card. It looks ugly in your system, which is a bummer because the rest of the Founders Edition is so thoughtfully designed.

5. HDMI 2.1, Nvidia Broadcast, and other goodies

As usual, Nvidia’s offering more than just a gaming performance upgrade with its RTX 30-series graphics cards. The ports received a substantial upgrade. The single HDMI port makes the jump to HDMI 2.1, which can support up to 8K/60Hz video output over a single cable, as can the upgraded DisplayPort 1.4a connections. Nvidia bolsters those technologies with the ability to capture 8K30 HDR video using GeForce Experience, as well as AV1 decode support, which takes over video decoding from the CPU to enable 8K60 HDR streaming from YouTube and other sources.

The goodies keep coming. Nvidia Reflex aims to significantly reduce input latency in games that support the API, reducing the delay between the time you click your mouse and when your character actually moves onscreen in esports, where every millisecond matters. Call of Duty Warzone, Valorant, Fortnite, and Destiny 2 will be among the first games to support Nvidia Reflex this month. Reflex will also be enabled for Call of Duty: Modern Warfare, Call of Duty: Black Ops Cold War, and Apex: Legends.

Moving on, DLSS and ray tracing denoising isn’t all that tensor cores can do. The new Nvidia Broadcast app leverages that AI hardware to provide streamers with all sorts of nifty on-the-fly effects, ranging from the magical RTX Video noise-cancellation feature to video effects that include adjustable background blur, greenscreen-style background replacement, and automatic head-tracking effects. If they work as well as advertised, Broadcast could be a huge help in giving some pro-level setup polish to amateur streams—no investment in pricey greenscreens or fancy webcams required.

Finally, RTX IO is innovative new technology that taps into Microsoft’s DirectStorage API to let your NVMe SSD funnel data directly to your GPU, skipping the pokey CPU and system memory bottlenecks. It sounds like the drool-worthy storage tech inside the next-gen Xbox Series X and PlayStation 5 consoles. It won’t be available in actual games until next year at the earliest, alas, but if it takes off, this could be a huge deal for PC gaming. Read our article on how Microsoft and Nvidia plan to kill game-loading times on PCs if you want to know more. (We also expect AMD’s “Big Navi” Radeon RTX 6000-series graphics cards to support Microsoft DirectStorage in some way when they’re revealed on October 28.)

That’s all you need to know for a high-level overview of Nvidia’s GeForce RTX 3080. Succinctly put: It’s insanely fast. If you’re still itching for more info, be sure to check out our comprehensive review of Nvidia’s GeForce RTX 3080 Founders Edition, where we dig into deep detail on every aspect we breezed through above—and more. We’ve also published plenty of other information about Nvidia’s RTX 30-series GPUs. Hit any of the links below to check it out:

Note: When you purchase something after clicking links in our articles, we may earn a small commission. Read our affiliate link policy for more details.