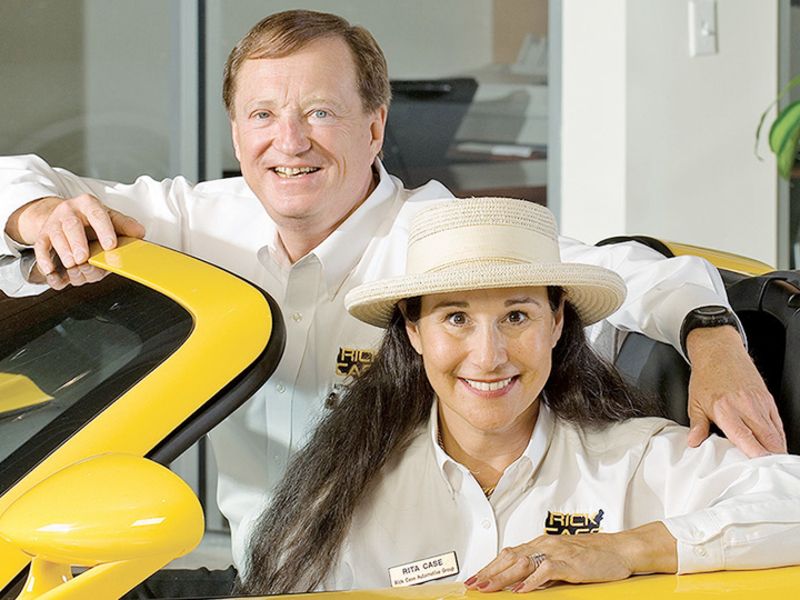 He and Rita, whose parents owned a Honda car and motorcycle dealership in Santa Rosa, Calif., met in 1977 at a Honda convention. They married in 1980, and Rita joined him in Akron, where they operated the business together before moving to Fort Lauderdale in 1985.

“He always said, ‘The biggest sales job and the most important sales job I ever made in my life was selling Rita to leave her Honda dealership,’ ” Rita Case recalled.

Many of Case’s innovations have made a mark in the industry. At his prodding, Hyundai adopted a 10-year/100,000-mile powertrain warranty for the 1999 model year, a move credited with helping the then-troubled Korean automaker make a major sales resurgence.

Rita Case said she will become the group’s CEO. She had run dealership operations for years while her husband worked on advertising and marketing. Ryan Case, one of the couple’s sons, is the group’s fixed-operations director.

Case received many awards for his work and community service. He was named the 2013 Automotive News All-Star for privately held dealer. In 2011, he wrote a book, Our Customers Our Friends, to celebrate five decades as a car dealer.

Case raised millions of dollars for nonprofits, his family said. His legacy in South Florida is large, ranging from scholarships and youth programs to a 77-home Habitat for Humanity community under development in Pompano Beach.

He and Rita joined the board of the Boys and Girls Clubs of Broward County in 1986 and were active in fundraising and developing charity events, including the Boca Raton Concours d’Elegance. They helped the organization expand from three boys clubs to 12 boys and girls clubs serving 12,500 at-risk youth.

Club co-CEO Matt Organ said Case remained active in board meetings via Zoom this year and fielded calls for an event just a few weeks ago. Organ said he did not know Case was ill.

“It’s literally knocked the wind out of us a bit,” he said. “We loved the guy. He wasn’t just a donor. …He’s part of the family.”

It wasn’t the first time Case worked through pain. In 1970, he sustained third-degree burns to much of his body after he tried putting out a fire that had started in one of his service departments. It took him months to recover, but he turned his hospital room into an office that hosted managers’ meetings and sales calls, his family said. It was fitting given that one of Case’s mantras was, “If you want to succeed, you will overcome anything.”