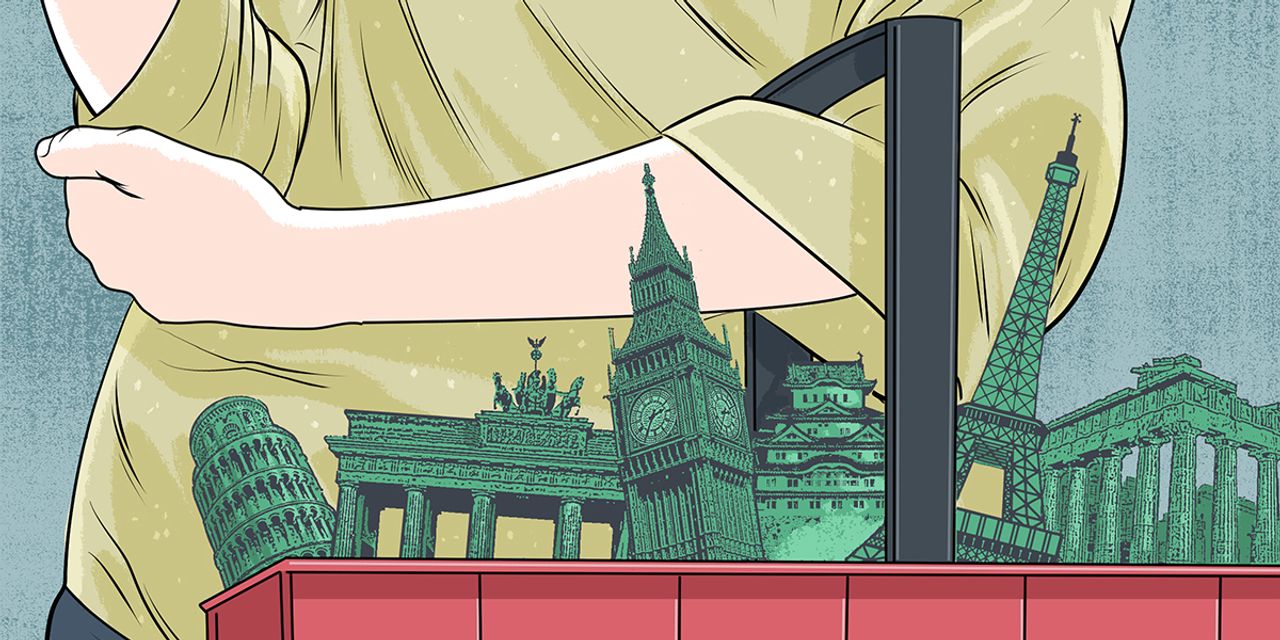 Cast aside as old and tired, European and Japanese stocks rarely get a second glance from growth-obsessed investors mesmerized by U.S. technology stocks.

Moreover, many European countries and Japan were able to get a handle on the coronavirus before recent flare-ups, and are also poised to benefit early from a recovery in the global economy.

Barron’s has identified five such growth stocks and three exchange-traded funds for investors to consider. More on them in a moment.

Some of the traits that led to a lost decade for foreign stocks are about to work in their favor: Lighter on the highflying technology stocks that have powered the U.S. market, European and Japanese markets have a heavier weighting in companies tied to the economy’s performance, such as financials, materials, and industrials.

“A recovery favors more value-oriented cyclical markets, and European and Japanese markets are much more geared to global growth and more export-oriented than the U.S., so we expect them to benefit into 2021,” says Chris Dyer, director of Global Equity for Eaton Vance and manager of the Calvert International Equity fund. “We are encouraging clients to either diversify away from the U.S. or just rebalance allocations.”

The urge to do some portfolio globe-trotting comes in large part from a growing wariness about American stocks. That is a shift, given how dominant the U.S. market has been: Over the past decade, the S&P 500 index has eviscerated the MSCI World ex-USA index, returning 13.9% a year, on average, compared with just 5.5% for the rest of the world.

Yet unease over the degree to which tech stocks account for the U.S. rally and uncertainties about the U.S. election weigh on money managers’ minds, as does the escalation in U.S. tensions with China. A weaker U.S. dollar is also a concern.

Above all, U.S. stocks are pricey. Based on current valuations, U.S. stocks are priced to deliver half a percent of real, or inflation-adjusted, return for the next decade, while Europe and Japan are offering 10 times that, at a real return of about 5%, says Robert Arnott, founder of Research Affiliates.

“The general view is that Europe is past its prime,” Arnott tells Barron’s. “Its demographic challenges are self-evident, and it’s a slow-growth future. Yes, but there’s still growth and terrific yields—3% to 4% on stocks—and it will rise with GDP growth. The narrative is creating the investment opportunity.”

Valuation is also luring U.S. investors to Japan. It was one of the main reasons that Warren Buffett recently invested $6 billion in five Japanese trading companies.

Using a Shiller price/earnings ratio, European stocks are trading at almost half that of the S&P, which trades at 31 times. Japanese stocks have a Shiller P/E of 19. Even more striking: The market value of U.S. technology stocks eclipses that of the entire European market.

If worries about the valuations of some of the U.S. technology darlings intensifies, BlackRock Multi-Asset Income fund manager Michael Fredericks says that investors may seek out companies with respectable growth trading for less—leading them to Europe and other parts of the world.

Over the summer, he dialed back on what had been a strong preference for the U.S., with some of that money going to Europe and emerging markets.

Recent fund flows suggest that others are beginning to make similar moves, with positive flows into European and global equity funds over the past eight weeks offsetting outflows elsewhere in developed markets, according to EPFR Global.

The outlook for Europe and Japan will depend, as it does for all economies, on the extent to which the coronavirus pandemic can be contained. Still, many European and Asian nations have been more successful than the U.S. in handling the virus, which spurs confidence that they would be better placed to deal with another wave—including a recent spike in cases in parts of Europe.

Europe’s response to the pandemic is notable for another reason: The 750 billion euro ($885 billion) European Recovery Fund is a groundbreaking development. It taps the wealthier countries in the European Union to help those less rich without requiring them to slash pensions and raise taxes, as was the case in the past.

“It signals greater cohesion and goes against the concerns the market had about the fragility of the European Union for the last decade, and should argue for a lower equity risk premium, which could help performance versus other markets,” Dyer says.

The economies of Europe and Japan aren’t going to be highfliers, but they offer distinct niches of growth. Take luxury goods, where Europe is home to leaders

(ORSTED.Denmark) may be unfamiliar to most Americans, but its stock has outpaced some U.S. tech highfliers, rising an average of 38% a year since going public in June 2016.

Barron’s talked with large global and international managers about stocks they have picked up in Europe and Japan. Here are five:

(TMV.Germany), which allows people to share technology and presentations across multiple devices, is a European work-from-home winner as

In some ways, TeamViewer is more attractive than Zoom.

“For companies with exceptional secular growth prospects that address huge markets, such as TeamViewer, one can still make a valuation argument grounded in earnings and cash flow, and we don’t have to resort to newfangled metrics like price-to-sales that may turn out to rest on shaky foundations for companies such as Zoom,” says Carl Kawaja, co-manager of the $167 billion EuroPacific Growth fund.

TeamViewer trades at 36 times his team’s 2023 estimate for earnings while Zoom is trading at 36 times sales estimates. Though not cheap, analysts also still see upside. On FactSet, analysts’ average price rating for TeamViewer is €54.46, implying about 30% upside in the next 12-months.

For the wealthy, whose stock portfolios have risen even as they have had to cancel vacations and the like, spending on luxury goods has remained strong. Indeed, the order book of Italian auto maker

Ferrari hasn’t been immune to the pandemic. Manufacturing shutdowns and disruptions at suppliers earlier in the year contributed to depressed sales and earnings. But Davis says the company plans to catch up on the delayed production in the remainder of the year and into 2021. At 41 times 2021 estimated earnings, the stock may look luxury-priced, but it reflects some of the disruptions.

Ferrari has margins on its earnings before interest, taxes, depreciation, and amortization, or Ebitda, that are north of 30%—double that of other auto makers. Its innovation has set it apart, and the next couple of years, especially, should benefit from its earlier spending as the company hybridizes most of its lineup and launches a larger-size Ferrari utility vehicle that could woo new customers in emerging markets.

A majority of the sales at Spain’s

(AMADY), one of the world’s largest travel-reservations company, were tied directly to air passenger volumes. Not surprisingly, the company, which also handles technology for airline and hotel companies, has taken a beating, with shares falling nearly 30% this year.

But the company strengthened its balance sheet early in the crisis with a stock offering. It should have enough cash and credit facilities to withstand a 90% drop over about two years in global airline passenger numbers relative to pre-Covid levels, estimates Calvert’s Dyer.

Along with that liquidity, its strong and differentiated technology positions it well for a travel recovery. Chinese domestic air traffic is beginning to recover, and most fund managers expect a sharper bounceback once the virus is under control elsewhere.

Amadeus also has the opportunity to gain market share as travel companies—especially smaller hotels that dominate the European market—look to outsource their technology as they cut costs, says John Remmert, co-manager of the $2.4 billion Franklin International Growth fund. The company is like

As Amadeus emerges from the downturn, Calvert’s Dyer sees the company generating 30% earnings growth through 2025 from depressed 2020 levels. That would translate to a free-cash-flow yield of 7% in five years, which Dyer thinks could support steady mid- to high-teens percentage gains in the stock. The shares trades at 22 times expected 2022 earnings.

Instead of traveling, some people are seeking out “solitary leisure” activities like biking and fishing. That has been a boon for Japan’s Shimano (SMNNY), which sells bicycle components and fishing gear. Commuters in large cities are also riding bikes rather than taking public transport. It is a trend that money managers like Nick Niziolek, Calamos Investments’ co-chief investment officer, see continuing over the medium term as consumer preferences change.

The demand has created a shortage of bikes globally. While the delivery of some orders could be delayed to next year because of capacity constraints, UBS analyst Ally Chen expects many new bike-product launches in 2021, which should bolster sales growth for Shimano. The company has 70% of the market share in producing sports-bicycle components.

While the stock is trading at 33 times next year’s earnings, that is still a bargain compared with some other pandemic beneficiaries such as

(PTON). Chen sees additional upside of almost 20%, with a price target of 25,450 yen, according to a recent client note.

This weekly email offers a full list of stories and other features in this week’s magazine. Saturday mornings ET.

As Shimano benefits from people trying to adjust to the pandemic,

(SRT.Germany) has received a boost as researchers rush to get life back to normal with a vaccine. The German laboratory supplier plays a crucial role in the research and commercial production of biotech and pharmaceutical products, providing bioreactors, fermenting tanks, and filters for the production and process of researching and producing drugs. among other things.

“We view Sartorius as one of the key ‘arms dealers’ in the pandemic, as they are likely to supply critical production equipment to nearly all of the leading Covid-19 vaccine manufacturers,” says David Eiswert, manager of the $4.8 billion T. Rowe Price Global Stock fund. “The company’s focus on single-use technologies is also a key enabler of the rapid ramp-up in production capacity to support a global rollout of a vaccine.”

While the stock is trading at almost 36 times enterprise value to adjusted Ebitda, a premium to its three-year average, Eiswert says it is far cheaper than pure plays like

(RGEN), trading at almost double that.

Eiswert notes that Sartorius’ organic growth will probably accelerate to the fastest rate in at least a decade over the next 12 to 24 months, from 18% in 2019. He sees greater adoption of single-use technologies over the next five years as the industry shifts toward more biologics, vaccine research potentially gets renewed life, and there is a push to cut costs. That could set up Sartorius for the type of strong, long-term growth that investors might not have associated with developed markets such as Europe.

Investors who prefer a broader way to get exposure to developed markets outside the U.S. might want to try the

exchange-traded fund (EFA). Other options include the

Cheap valuations and an improving global economy could help international stocks snap out of their lost decade. And as investors take a closer look, they might even find some companies—and stocks—with exciting growth.