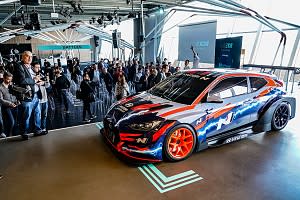 The WTCR has yet to formally announce plans to incorporate electric or hybrid powertrains in the future, with the FIA saying in 2019 that such a move could take a “few years” due to the costs involved in developing such technology.

By contrast, the British Touring Car Championship is set to move to hybrid power in 2022, with Cosworth winning a tender to supply a standard unit to all teams, featuring a 60 volt battery.

Former Formula 1 driver Monteiro, who has been a regular in WTCR and its predecessor World Touring Car Championship since 2007, said manufacturers have more to gain by electrifying touring cars due to their physical resemblance to their road-going counterparts.

“Therefore motorsport will have to align as well with this.

“Now, I think it makes more sense to have electrical vehicles in touring cars.

“At the end of the day we are here to promote brands, to promote cars and to make manufacturers sell cars on Monday after the race.

“And what better than a car that looks like your road car on a day to day basis.

“If you have an electric race car and it wins, it’s the best promotion you can have in order to sell cars during the week.

“So I think even more than single-seaters, electric should be in touring cars and probable GTs very soon.”

WTCR promoter Eurosport Events has been working on a new all-electric touring car championship by the name of Pure ETCR that will make its competition debut in 2021.

Monteiro considers the new series as “the first step'” towards WTCR itself going fully electric in the coming years.

“I think this is the first important step in this direction.

“And there is a huge opportunity for WTCR to maybe in time, I’m not saying one or two years, but in time to switch to electrical full-time.

“Well I agree of course this is now the electrified world,” Guerrieri said.

“But some important point I’ve seen in Formula E, five years ago is that it a platform for development for the manufacturers and that’s one of the key points I feel why Formula E was so successful.

“I think there is a platform there for so much development that we not even realise, that’s why I think all the manufacturers are going that way. Plus, the environmental purpose as well.

“So these two things are much more stronger than probably making the cars so spectacular on track because of sound and everything.”