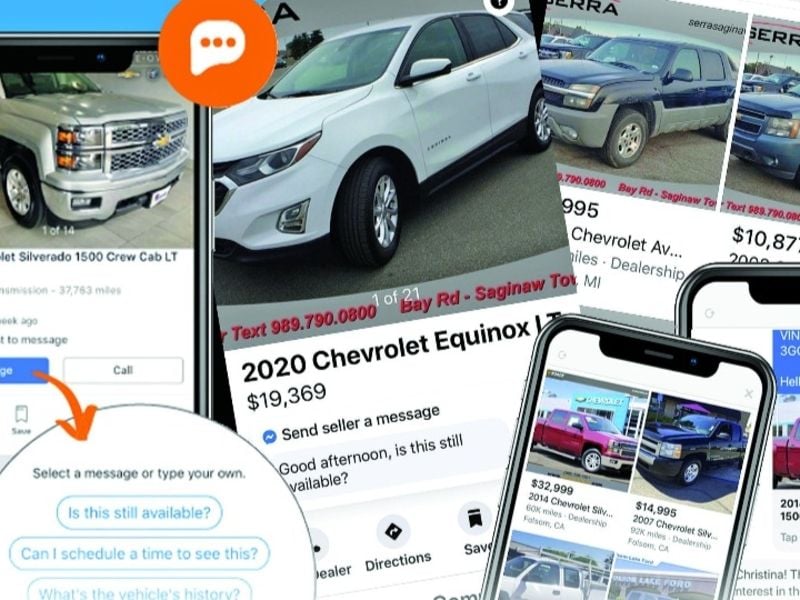 Inventory can be uploaded for free. When perusing vehicle listings, consumers can see how pricing compares with that of other vehicles using the Kelley Blue Book Fair Market Range tool.

When interested shoppers send inquiries via Facebook Messenger, it’s up to dealerships how to engage with them. Digital Air Strike connects with these clients via a chatbot through its Response Path technology. The bot can shepherd the conversation to the next stage by forwarding leads to a dealership’s customer relationship management system.

Although Facebook only allows for used cars to be listed, Venneri said new vehicles can be pitched during the chat. Shoppers have the option to switch over to a salesperson during the Messenger exchanges via text or a call.

Stores are having success on the platform.

Digital Air Strike attributed 212 sales and more than $415,000 in revenue for Mac Haik Chrysler-Dodge-Jeep-Ram in Jackson, Miss., to Marketplace from June 11 to Wednesday, Sept. 9. The marketing company’s Response Path tool handled more than 6,000 conversations that turned into 1,900 leads.

During that same stretch, it handled 247 conversations on Marketplace for Hampton Toyota in Lafayette, La., that resulted in 59 leads and seven sales.

In July and August, Volkswagen of Abilene in Texas kick-started 86 conversations on Marketplace that generated 21 leads. Digital Air Strike said the discussions resulted in three sales.

The used-car market has been fighting through the pandemic-induced economic downturn.

Edmunds said the average value of used cars increased more than 16 percent in July alone and that franchised car dealers sold 1.2 million used cars and trucks in June, up 22 percent from a year earlier.

It was the highest monthly total since at least 2007.

Consumers have a largely favorable view of Marketplace that dealers can capitalize on.

Venneri said Marketplace is evolving into its own world. Facebook users can sign onto the platform these days with commerce in mind, not just to share photos.

“You don’t need to be the person that goes on Facebook and wants to post pictures of your cats and kids,” Venneri told Automotive News. “It’s more transactional in nature.”