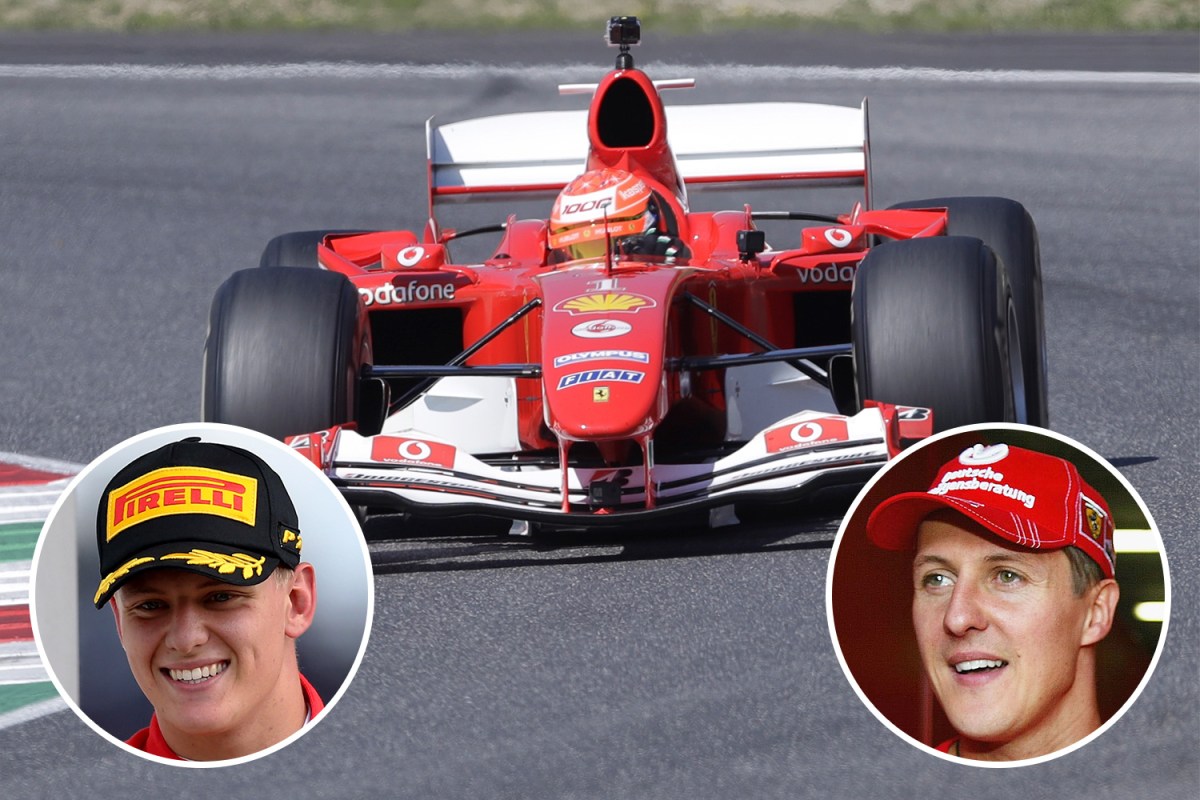 Michael’s son paraded around the track before the start of Sunday’s Tuscan Grand Prix.

The 21-year-old was in the cockpit of the F2004 – the car his dad drove to his seventh and final world championship 16 years ago.

The demonstration run around the track is part of the festivities put on to mark the Italian brand’s milestone.

And Ferrari described it as ‘a fitting tribute to the Scuderia’s most successful car and its incomparable driver’.

Michael, 51, suffered a severe brain injury in a horrific skiing accident in 2014.

Wife Corinna, Mick and Schumacher’s daughter Gina-Marie care for him in Switzerland.

The F1 legend is still ‘fighting’ to recover according to best pal Jean Todt – one of a handful of visitors allowed to see the racing great.

Mick won his first feature race at Monza in Formula 2 last week and is a member of the Ferrari Driver Academy.

It is not the first time he has taken his dad’s retro model for a spin after throwing it around Hockenheim before the German Grand Prix last year.

I had ‘heated’ romp with Greenwood after he scoffed jelly babies, reveals model

Huge Tuscan GP crash makes Grosjean fume ‘they want to kill us or what?’

Mick said: “This was always a dream for me to drive this car.

“I drove the car at Hockenheim last year but to drive it at Mugello in non-rainy conditions has been an absolute honour.

“Obviously knowing that a lot of kilometres have been done here with this car as well, and to be able to drive it and the second generation to drive it is something very special.

“I chose this livery because I wanted really to have everything I could for it to be as it was back then.

“The feeling, the way it was driving and handling was very impressive. I’m sure some miles off what it was doing back then but it’s incredible.

“Thank you to Ferrari for this opportunity. “

Other special arrangements for Ferrari hitting four figures include a one-off burgundy colour scheme on their SF1000 cars.

Sebastian Vettel and Charles Leclerc will race in the colour shade in a nod to the manufacturer’s origins.

The unique livery was first seen on the first racing car ever to carry the iconic Ferrari name.