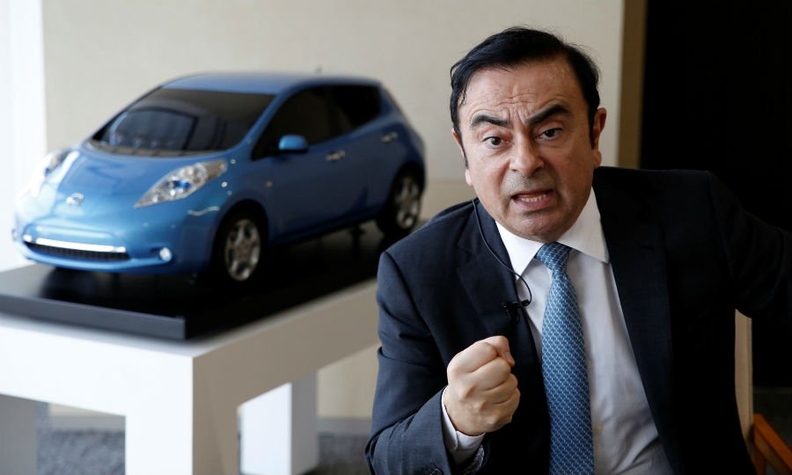 But that could change. And Page 1 of Monday’s issue shows why.

As our lead story points out, Ghosn stuck his neck out more than a decade ago. That’s when he, as CEO of a mainstream automaker, placed a big bet on a fully electric car, the Nissan Leaf.

The Leaf ended up capturing only about a third of its sales target. And since then, much of the industry began investing heavily in EVs, overshadowing Ghosn’s pioneering effort.

But Nissan is now charging up for a second crack at the segment in the form of the Ariya crossover. When it debuts next year, it will be the first in a new generation of Nissan-Renault-Mitsubishi EVs.

A lot will ride on the Ariya’s midsize shoulders. It will be a technology showcase, more upscale than the Leaf. It will give Nissan a chance to bolster its fragile alliance with Renault. It will be a symbol of the smaller, smarter Nissan being forged by CEO Makoto Uchida.

And it may help seal a place in history for Ghosn. Development of the Ariya began under his watch. And if electric cars do become commonplace, the history books should rightly cast Ghosn as a visionary and catalyst. He was the one established CEO who stuck with them, investing through the Great Recession, when his peers went other ways.

Such a distinction may be hard to imagine now, given that Ghosn is living in exile in Lebanon, where he fled to escape Japanese courts. But he’s never been convicted of anything. And that’s why the Tokyo trial of Ghosn lieutenant Greg Kelly is so critical. Kelly is the former Nissan executive accused of colluding with Ghosn to hide about $86 million in deferred income from public scrutiny.

As another Page 1 story shows, Kelly’s trial has ramifications for Nissan (especially given reports that Ghosn may have been the victim of an internal coup). It also puts an unflattering spotlight on Japan and its attractiveness as a place to do business.

And it has ramifications for Ghosn himself. If Kelly avoids conviction, Ghosn will be vindicated in a big way — which, in turn, will color his portrait in the history books.

Given all that’s transpired in the two years since Ghosn’s arrest, it’s easy to forget that it was Ghosn who saved Nissan more than two decades ago. Kelly remembers, and he said it out loud in court last week.

“Mr. Ghosn was an extraordinary executive,” Kelly said. Even though most industry watchers thought Nissan was doomed, “Mr. Ghosn proved the experts wrong.”